Man Tries to Get to Egypt in Plane Engine

We know Hurghada's pretty nice and all, but one Siberian man's efforts to get there have us baffled. 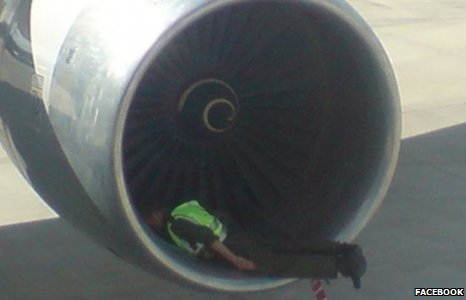 We have heard about stowaways hiding in the wheel well of planes before - which is pretty stupid as it is - however, attempting to stowaway in a plane's engine? That just might be the stupidest thing we have ever heard.

According to Moscow Times, Russian authorities on Thursday found a Siberian man trying to hitch a ride to Egypt in the engine of a passenger plane. "Prosecutors are establishing all the circumstances of the incident, including the motivation of the stowaway and how he entered the aircraft," a transportation official in the Siberian city of Kemerovo told the Interfax news agency.

The man's identity is yet to be revealed, and was discovered Saturday as staff inspected the Boeing aircraft before its departure from Kemerovo to Hurghada.

"The man was behaving weirdly and could not explain his behaviour. He was taken by ambulance from the airport to a hospital where he is still located," the transportation official continued.