Ahead of COP27, Mariam Saleh Binladen makes history as the first woman and Arab to swim from Saudi Arabia to Egypt. 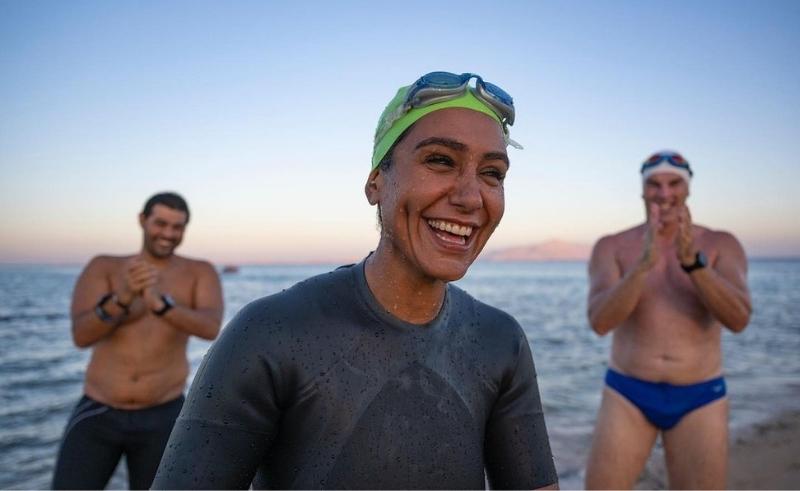 Saudi doctor, refugee advocate, and certified endurance swimmer Mariam Binsaleh makes history as the first woman and Arab to swim from Saudi Arabia to Egypt, conquering a 160km journey across the Red Sea from Tiran Island to Sharm El Sheikh. The undertaking was part of Coral Swim, a call to climate action to protect oceans and coral reefs ahead of COP27 in Sharm El Sheikh, where Binladen swam alongside environmental advocate Lewis Pugh and Egyptian swimmer Mostafa Zaki.

This latest achievement is but another victory in Binladen’s swimming career. She was the first Arab woman to swim from Europe to Asia in the Hellespont Open Water Competition in Turkey, which was also her first international competition in 2015. She was also the first woman to swim the entire length of the River Thames in London in 2016 over ten days, as well as the first swimmer to complete a 24km  race from the Dubai Creek and the Dubai Water Canal in the UAE in less than nine hours.

The athlete also works as an advocate, having dedicated her swimming achievements to Syrian refugees. She partnered up with the UNHCR to continuously bring their plights to the spotlight, and has previously established a dental medical centre in Azraq camp for Syrian refugees.