A video made by self-proclaimed 'Mipsters' - Muslim hipsters, of course - showing veiled girls having regular teenage fun, has been met with an avalanche of criticism. Our own hojabi has a thing or two to say about it... 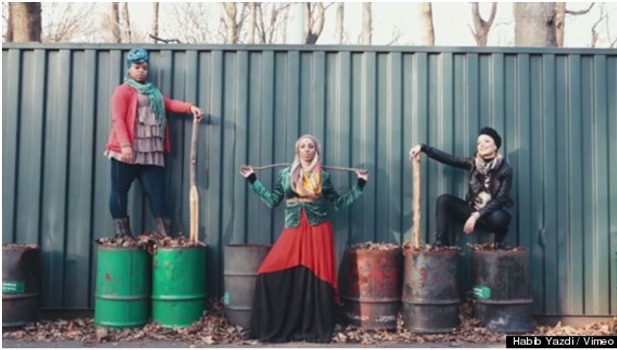 Somewhere in America, people all across the spectrum of Islam are angry about a video that a few hijabista girls appeared in. There’s even been a Buzzfeed page about the subject. The uproar erupted after the Mipsters (Muslim hipsters –it’s a thing) video exploded across the Internet with hijabies skateboarding, doing handstands, and (GASP!) laughing together. There was outrage as to whether these girls should be representing Islam. Well, I’m here to tell you something; girls just want to have fun! These girls can skateboard, in heels mind you, ride motorcycles, make Olympic teams, and make references to one of the greatest movies of our generation, The Sandlot (“You’re killing me Smalls!”)  with their clothing. I’m pretty sure their intention was not to represent the Islamic religion as a whole, but rather just to show them as they are.

So, many people came out with “these girls don’t represent Islam.” Well, believe it or not, they do represent a group of Muslim women in Islam, be that in America or anywhere else. There are girls here in Egypt that dress just like the girls in the video and nothing is ever said to them. People need to understand that people interpret hijab in different facets and should not be scrutinised for making what they saw as a fun, well-edited video. People were shocked that the video was staged to the explicit version of an awesome Jay-Z song that even references Miley Cyrus’ twerking (“twerk, twerk, twerk”), but the reality of the situation is that whether you agree with it or not, Muslim women listen to this just as Muslim men do. They are representative of the times. Call them hojabis, we all know I’m very familiar with the term, but don’t turn their fun into something that its not. It’s unfair to judge these women for being themselves.

Side note: I’m really upset I wasn’t asked to be in this video.