Dubai's at it once again, this time planning to throw the world's largest firework display come NYE. 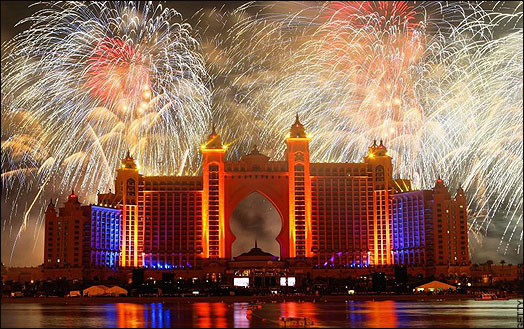 Not content with having the biggest, best and shiniest everything else in the world, those rascals in Dubai are at it again, this time with fireworks. Yes, that's right - the over-compensation capital of the world now plans to break the Guinness World Record for the largest firework display. The New Years Eve record breaking attempt is set to include 400,000 fireworks launched from over 400 locations by 100 computers controlling the spectacle along Jumeirah beach. Impressive. Kinda.

But that's not all - the men behind the world's most collosal waste of money also plan to create an image of the UAE flag which will span 29,250 square metres, making it...the largest pyrotechnic flag ever displayed. Although we're not quite sure who previously held the 'coveted title'.

Director General of Dubai’s Department of Tourism and Commerce Marketing, Helal Saeed Al Merri, said: “The celebrations will mark the end of a momentous year for Dubai — a year which we will reflect on with pride and has laid the groundwork for a prosperous future,” .....of course he would say that, wouldn't he?

Here at CairoScene we can't help but wonder where this constant need to show off comes from - and what exactly people like Mr Al Merri may be trying to compensate for. Hashtag just saying.