The Nobel Peace Prize winner told an eager audience in Cairo how to achieve 'super happiness' outside of the constrains of the traditional finance and banking systems. Valentina Primo got the chance to absorb his wisdom... 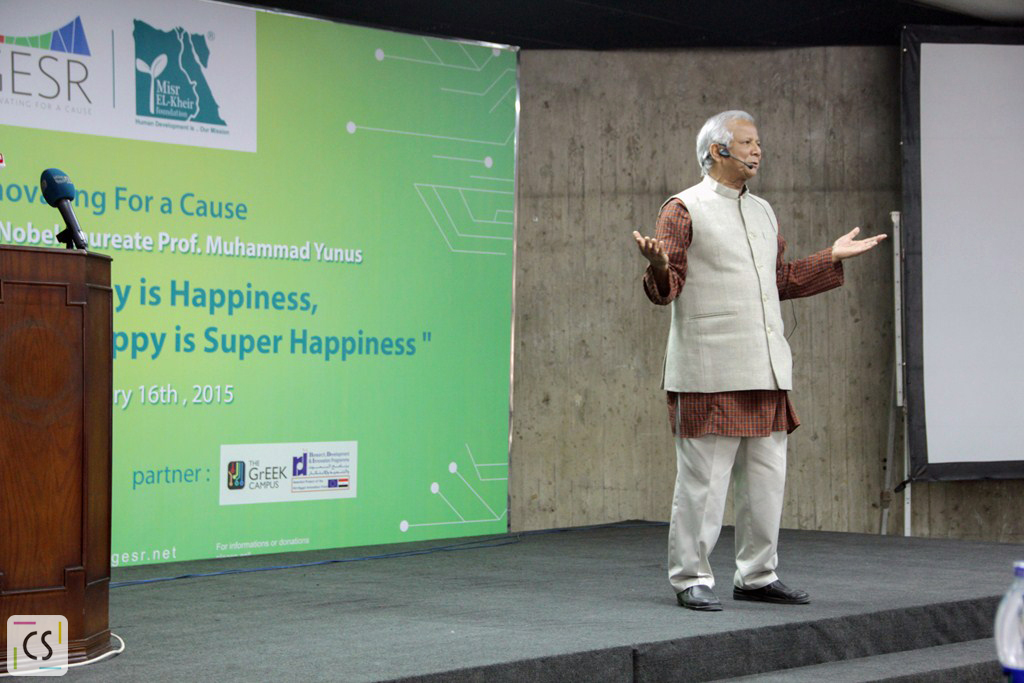 Thirty dollars. That’s all it took Muhammad Yunus, known as the banker to the poor, to revert poverty in Bangladesh. The brain father of social business and a role model for changemakers across the world, Yunus created a system of $30 microcredits that have helped 8.5 million people create their small businesses and earned him a Nobel Peace Prize.

On a visit to Cairo yesterday, Yunus explained how microcredits can tackle the neoliberal economy’s most urgent crack. “We have all these text books to solve the bigger problems, and yet people are poorer. The world is a joke!” he says at the Innovating For a Cause event held by Misr El Kheir at the GrEEK Campus, as he began to slowly de-construct the ‘books’ that shape our economic behaviour; forget about your idea of a job, discard your conception of a bank, and let go of your perception of happiness.

“I kept asking bankers: ‘why are you loaning money to the rich if they are not the ones who need it?’ It didn´t seem logical to me,” he says. As a battle broke out between Yunus and the banks to provide micro-loans to deprived villagers in Bangladesh, the economist decided to create the Grameen Bank, an institution based on a code of trust that loans microcredits without requiring collateral. Today, the bank has 8.5 million borrowers distributed across the 8,000 villages that make up Bangladesh.

“The system created the problem, so don’t expect it to solve it. You need to create a new system,” Yunus says, and he is not merely referring to finance. “50% of the youth in Spain are unemployed; 70% in Greece and 40% in Italy. And I keep telling them: why should the young people’s energy and power remain wasted? Is he not willing? Does he not have the power? Then why isn’t he working? We made him believe that he cannot function. We created a system that doesn’t work and blame the human being for that. So my question is: should the system punish the human being or the human being punish the system?”

According to CAPMAS, 2014 saw a rocketing rate of unemployment in Egypt, reaching as far as 29% of youth between the ages of 18 and 29. In this context, can a seemingly symbolic loan translate money into an entrepreneurial activity? According to Yunus, all it takes is to create a new system.

“Who told you that you need to have a job? Are we created to become workers? Human beings are creative, we are basic entrepreneurs but we do not want to accept it. We need to tell ourselves: ‘I am not a job seeker, I am a job creator,’” he affirms.

Looking back into Grameen Bank´s inception, Yunus remembers he didn’t aim at solving a world problem or a national drawback. “I was just but as a dumb person who didn’t know anything and wanted to make myself useful for another human being,” he adds. But the economist finds it hard to explain people how he can make business without making money. “It’s not about making money, it’s about solving problems in a business way,” he explains.

Having pioneered in the concept of social business, Yunus relativises the link between money and happiness; “We’ve got human beings wrong. We make them look like money-making robots, when in fact, a human is a much bigger being, not only guided by selfishness but also by altruism.”

Yunus’ brainchild, Grameen, is precisely that: a business based on selflessness. “I always say that making money is happiness. But making other people happy is super happiness. The problem is that it’s not in the books. Why don’t we start including in textbooks that there are two kinds of businesses: business to make money and business to change the world?”