An archaeological excavation beginning last April has brought about the coolest or creepiest tomb discovery, depending on how you look at it. 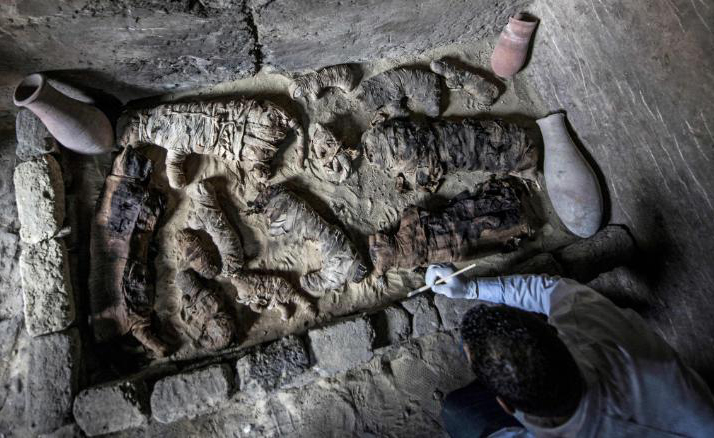 Dozens of mummified cats and rare scarab beetles were discovered during an archeological excavation in Saqqara, according to Egypt’s Antiquities' Ministry.

In a Saturday press conference, Egypt's Antiquities Minister Khaled Anany announced that the total of seven pharaonic tombs were excavated in Saqqara and the Upper Egyptian city of Minya, revealing that a staggering total 300 thousand mummified cats were discovered in both sites, according to Al Hayat.

The archaeological mission of the tombs in Saqqara and Minya was launched last April, with the goal to excavate seven of the areas' tombs, three of which contained dozens of cat mummies that date back to the fifth and sixth dynasties, 6000 years ago. Among the tombs was one belonging to Khufu-Imhat, the overseer of the royal palace. The scarab beetles were discovered in the Memphis necropolis. Two of the beetles were wrapped in linen inside limestone sarcophagus with images of large black beetles painted on. Another collection of scarab mummies was found in a smaller sarcophagus, stated secretary general of the Supreme Council of Antiquities Dr. Mostafa Waziri.

A bronze cat statue dedicated to the cat goddess Bastet was unearthed among 100 gilded cat statues and dozens of mummified cats.

#Tens of #cats #mummies were  unearthed in #Saqqara #necropolis along with 100 wooden #gilded #statues of #cats and a bronze one dedicated to the cat #goddess #bastet. pic.twitter.com/g0oSQPBhL8

The names Subek Sekt and Mafy were found engraved on a door; archeologists are yet to discover who these ancient Egyptian women were.

The newly discovered tombs were visited by government officials and ambassadors from all over the world in south of Cairo on Saturday. Included in the tombs were gilded wooden statues of a lion, cow, and a falcon, 1,000 amulets, some jars, writing tools, and chapters from the famed Book of the Dead.