The Fairmont Heliopolis and Towers' latest outlet serves up fresh fast food in a fabulous setting... 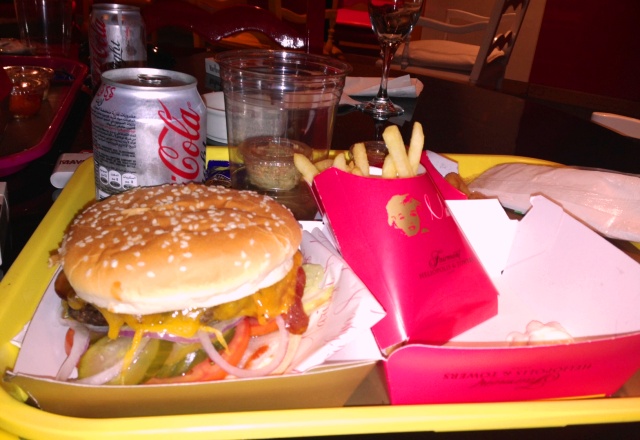 No meal is more complete than a burger. Meat? Check. Carbs? Check. Vegetables? Check. Sauces? You best believe there has to be a litany of choices. Picking up a juicy, succulent burger is really a feeling that is unrivalled by any other food. It’s like a bun filled with heaven. Finally, Egyptians are catching up to this, with a bunch of burger joints and gourmet factories popping up around the capital. Variety is always good, but it’s also going to be difficult to find a burger you can trust.

That’s why, when we heard the Fairmont Heliopolis and Towers’ had newly opened a fast food diner called Marilyn, no less, we had no choice but to trek east and give it a go. We all love us a room service hotel burger and matching that up with the always-fun Marilyn Monroe theme could only make the experience more interesting.

Marilyn is nestled at the end of the hotel, in a space that used to be a part of the all-day dining restaurant.  Splashed with bright yellow, red and white paint and with old-school looking and tables in the same bright colours, you’re instantly transported into a retro American diner. It’s a good thing that Marilyn Monroe was a size 16 – you don’t feel like the pictures of her that emblazon the walls and menus are judging you for eating fast food.  After going through the menu and seeing if our favourite Marilyn movies would translate into our favourite Marilyn burgers, we eventually decided on The Asphalt Jungle and Don’t Bother to Knock (if you haven’t got it yet, all the menu items are named after films Monroe starred in) as well as two orders of onion rings, because the waitress seemed to think seven wouldn’t be enough for two of us ( and, to be fair, we were already stressing over which one of us would get the fourth one).

The burgers arrived in fast food style;  complete with brightly-coloured plastic trays, and cardboard packaging with pop-art pictures of the restaurant’s namesake.  The best thing about Marilyn is that it’s the best of both worlds. A fast food experience with the ambiance that could only be found in a hotel. Designer fast food, if you will. And the food is delicious; juicy burgers and crisp fries (the kind that are soft in the middle like your mom used to make when she could be bothered) and we were both very relieved to have only ordered two portions onion rings and not just one. The burger is just right with fresh vegetables, Angus beef imported from the USA and light, fresh buns to wrap things up. We were done with our meal and felt neither too full nor hungry. With sausages, fried chicken and even a fusion shawerma sandwich on the menu, it’s fuss-free fast food made with the freshest ingredients. The best part? The prices are extremely reasonable with well-sized combos averaging at around 50LE.

Go to Marilyn for some quick and easy burgers, an interesting vibe and, most importantly, a little dose of old Hollywood style in the midst of Cairo’s chaos.