Scores of resorts across Morocco have banned the conservative burkini, in a move that has sparked anger among many in the Muslim country. 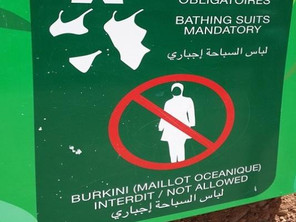 Thinking of jetting off to Morocco for a last-minute end-of-summer getaway while staying uber modest? Well now you can't — because hotels across the traditionally Muslim country have banned the burkini. Scores of resorts across the state have slapped a ban on the halal swimsuit, which covers the body and has a head covering attached, because they claim it's unclean.

Holiday hotspots across Morocco have been flooded with signs screaming “burkini not allowed,” causing misery for Muslim tourists planning to take a dip. One resort near the economic capital Casablanca told Al Arabiya News that burkinis are not allowed to be worn in the resort, with only “ordinary swim-suits” getting the green light from over-zealous fashion police.

The controversial stunt has sparked fury among activists. Government MP Abdelaziz Aftati has sent a complaint to Tourism Minister Lahcen Haddad, after a woman wearing a burkini was reportedly banned from a swimming pool in al-Jadida, according to local press reports.

Aftati claimed that the move signified the “rudeness of the new colonisation.” Meanwhile, he claimed that it is unacceptable to restrict people’s freedom and their beliefs.

In 2009 in France, a 35-year-old convert to Islam threatened legal action after she was evicted from a public pool for wearing a burkini. Meanwhile in Egypt, it is also common for hotels and resorts to ban women wearing the burkini to swim in pools.