Nocturnal antics abound at Nacelle's signature House Sessions and this weekend's edition promises even more of them as the iconic event taps legendary DJ Three to take over the decks. 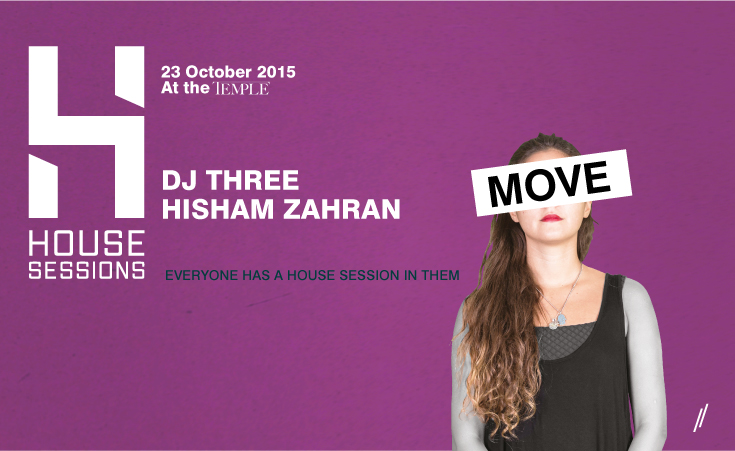 It's Cairo’s most celebrated event night; you know that certain special night where we let our guard down, become united, forget our worries and collectively dance like there’s no tomorrow, with gleaming smiles that carry on way past the event. You know that event that has consistently booked you solid, kickass DJs, paired them up with some of the best unprecedented audio sound systems in the country, and for your viewing pleasure has had some of the best visuals this city has to offer. That one ongoing event that makes you not want to miss anything they ever organise because they excel at creating the best nights out on the town for you and for your friends, and are the ones responsible for creating some of your best nocturnal memories like their lives depended on it.

If you’re still wondering about which of the city's events we’re speaking about, well get out from under that rock, and recognise. Nacelle, DUH? And this time they’re back this Friday the 23rd at The Temple with one of NYC’s best-kept secrets. Originally from Pittsburgh, DJ Three is what you call a DJ’s DJ; he’s a DJ other DJs stick around to hear what he’s playing. An inspiration to clubbers and artists alike, known for his twilight hours or closing sets, drawing from a wide pool of many musical genres and tastes, his sets take so many unexpected turns, yet somehow magically and through many years of experience end up perfectly woven together.

Echoing his wide tastes as a DJ, his rare production output under the monikers Second-Hand Satellites, Three A.M., and Montage Men has captured a not-so-common cross section of ears from Deep House to Techno, and all points in between. In 2003, Three launched the Hallucination Limited imprint as a platform for other like-minded artists which this year released the critically acclaimed mix CD Hallucienda mixed by Three himself. From veterans like Terry Francis and Rabbit in the Moon and new faces like Mount Sims, Reverse Commuter (aka [a]ppendics Shuffle), 3 Channels and Butane the results have been nothing short of outstanding. DJ Three officially launched his new label Hallucienda in 2014 releasing the Phono Obscura compilation and Reverse Commuter's Exposure album.

Opening for DJ Three this Friday is our very own local globe-trotting DJ Hisham Zahran, best known for his Nacelle sets as well as his Proton Radio Show. Zahran is no stranger to the scene or Egyptian crowd, and it doesn't take much to know that he will be bringing his A game and will be perfectly setting the mood for the night. The music man certainly isn’t short of accolades and has made a name for himself amongst partiers and music lovers alike.

Nacelle's House Sessions have been as consistent as they come, and this is weekend will not be any different; they'll be bringing you yet another quality night, with top notch tunes, and a crowd we all consider family under one roof for the bestest of times again.

For reservations and other inquiries email info@nacellegrooves.com or call +201020701701