The latest addition to Cairo's bustling nightlife scene is Zigzag and Pacha Sharm's explosive partnership, Nebula, an audio/video-themed experiment, with focus on stimulating the senses. 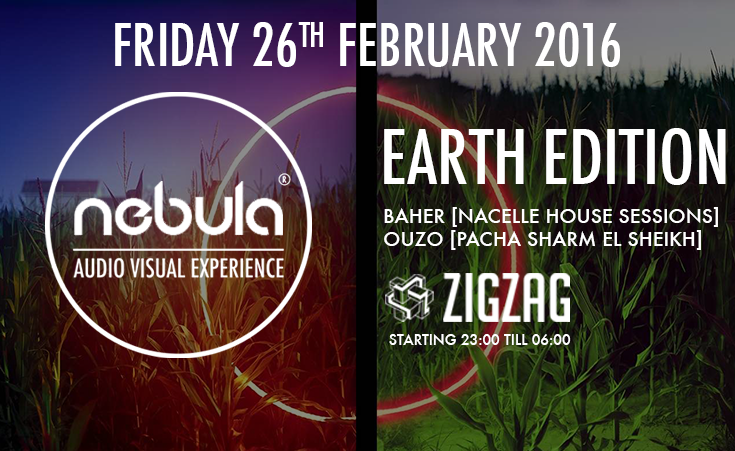 The latest addition to Cairo's bustling nightlife scene is Zigzag and Pacha Sharm's new partnership: Nebula. As defined by Oxford, "A nebula is a cloud of gas and dust in outer space, visible in the night sky either as an indistinct bright patch or as a dark silhouette against other luminous matter." Happening on Friday the 26th of this month, Nebula is set to be a bright and fiery spark in Cairo's nocturnal scene; people are already buzzing about the upcoming event, and so are we. Once a month, the Downtown club is reinventing itself to play host to an audio/video-themed experiment, with focus on stimulating the senses through presenting core elements of life, such as earth, fire, water, and more.

Hosting a different guest DJ every edition and special visual projection mapping, it looks like our favourite downtown abode is headed for liftoff and is now outer space bound, and we can hardly contain our excitement. The musical entertainment will be supplied by local masters and regular suspects, Ouzo and Baher. Ouzo is the Pacha Sharm resident whose sets we grew up raving to. Baher is a true Cairo nightlife hero who has been an integral part of Egypt's clubbing scene for years. Last, but certainly not least, is the Egyptian-born Dubfunk, a man that has been featured on record labels such as Global Underground, Audio Therapy, and Dyami Records. He's played venues as diverse as Pacha Sharm, to the renowned Turnmills, London.

Needless to say - since everyone already has the scoop on these places, but we will go ahead with it anyway – Pacha is one of the hottest nightlife brands in the world, with franchises on several continents. There is no doubt that when Pacha puts its name to something, it has to be good. Zigzag is Downtown's hottest underground club, and it's doing one hell of a job. With many ridiculously good parties under their belt, we are sure that Nebula in partnership with Pacha is going to be stupendously good.