Tamer Hosny has been touring the world and mingling with America's A-listers. We assume it went like this... 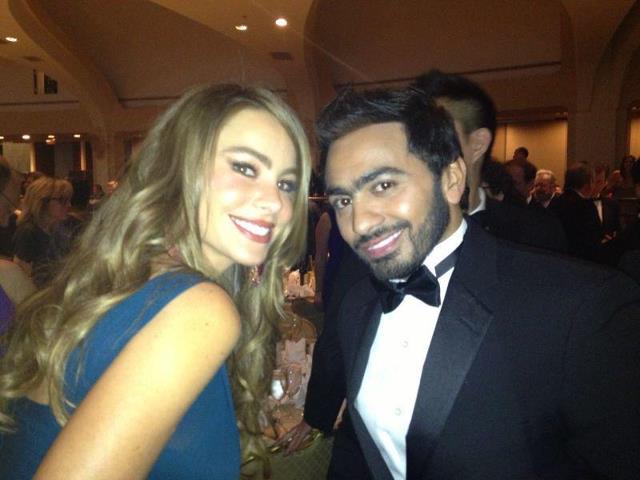 We’ve recently been following Tamer Hosny’s Twitter. Tamer Hosny’s Twitter is better than the Kardashians, American Idol and an MBC Turkish drama combined. It is an eye-glaring, endless stream of celebrity frolics, love letters and gym pictures. He appeals to the high-brow, the low-brow and the uni-brow. Women want him, men want to be him.

Thanks to God’s blessings and all my lovely fans I was invited to 3asha fel White House. I was not having a nice time at first 3ashan kan fi wahed asmarany keda, mish 3aref, yemken Se3eedy, he kept talking for ages and no one was paying attention to me, the star. Tamer Hosny does not like when the spotlight is not on him. Tamer Hosny was also upset that they did not put the requested extra cushioning on my dinner table so me3reftesh akol kwayes so I had to sit on Sofia Vergara’s lap. Estaghforallah.

After the Se3eedy stopped talking, I needed the toilet bas makansh fe shatafa! Mish fahem ya3ni, el khawagat el ma3afaneen dool beye3melo eh? It was a mess so I went back inside to find the bathroom attendant and when I found him, he kept asking to take a picture with me. Tamer Hosny is very famous for all people from all countries, you see, even South Korea.

Then I met another man. He said he was a producer so I told him about the song I did with Snoob Dogg,  and he asked me who that was. Meen Snoob Dogg!? Meen Snoob Dogg?! Ana 2olt el ragel dah akeed mish broducer, but he asked me to take a picture with him so I did, because he’s old and I felt bad for him. Se3eb 3alaya ya3ny.

Then I found Gerard Putler men film 300 and we compared gesms.

Then I went to the gym so I can have a gesm like Gerard Putler.

After the gym I went to the American version of our The Voice and met all my favourite famous people like Shakira. El hibs beta3etha msh betekdeb 3ala fekra…

Then I met Adham Levine. Ibn nas wallahi. I gave him a pack of my man gel and some tips on how to keep his hair like Cristiano Ronaldo.

Ba3d keda, wa7ed eswed  kept asking me to take a photo with him. I don’t know why he kept touching me. Howa meen aslan?

Embare7 I met J.LO! I asked her to be my girlfriend, and she said I’m sweet so now we’re sweet friends.

The ministry has announced that the train line’s second phase will run through [...]
Week Month Year