No Muslim Parking in Texas 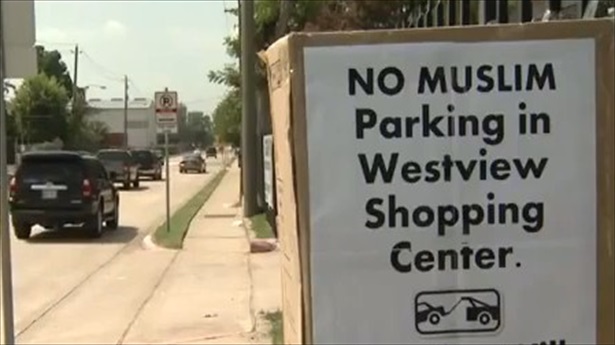 The signs were so offensive that they were taken down within hours, but they were up long enough to greet many Muslims on their way to Eid prayer. The problem the mall was facing was that it was across the street from El Farouq Mosque. According to television stations, multiple mall employees “admit that they get angry,” when El Farouq attendees use the shopping centre's parking lot, but all the claims made were never recorded, as the same employees declined to be interviewed on camera.

The angered reaction to the signs was fast and furious and resulted in everyone playing the blame game. It seemed that it would have been the owner of Westview Mall's fault, but he denies having them placed there. Of course someone is responsible and is a racist. If they didn't want mosque goers to park there, all they needed was a sign that said that "Parking is for Mall Patrons Only," however, this is Texas and they never miss the opportunity to offend.