It's the Gazan answer to the Ice Bucket Challenge - lacking the resources to throw ice buckets, Palestinians have opted to throw buckets of rubble to show the destruction on the Gaza Strip. 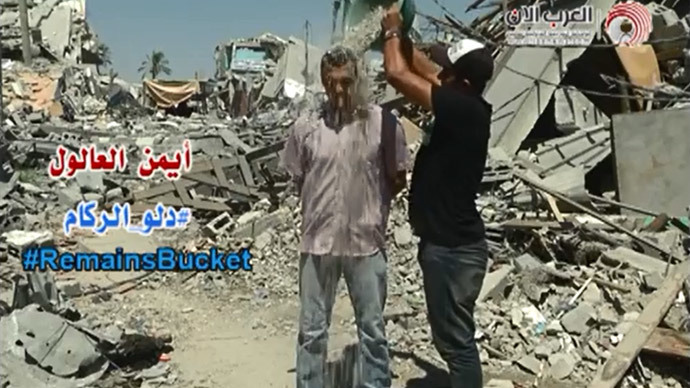 A Palestinian journalist has given the ice-bucket challenge a Gazan twist. Ayman al Aloul launched the bid in an effort to show realities of the destruction brought upon Gaza by the Israeli onslaught.He said: "I have to do something and to send a message all over the world about Gaza."

Al Aloul, 42, claims that when he discussed the idea with friends, some suggested that he use either a bucket of blood or shrapnel. However Aloul settled for a less gruesome approach. "It came to my mind that it's good idea to show the whole picture - how Gaza looks now, rubble, destruction, cement with sand, small rocks." This morning, nearly 2,000 had liked the Rubble Bucket Challenge page.