Penalised For Praying To Allah

The Twittersphere exploded in rage last night after a Muslim prayer, who knelt to thank Allah for scoring in Monday night's American Football game between the Chiefs and the Patriots, was penalised… 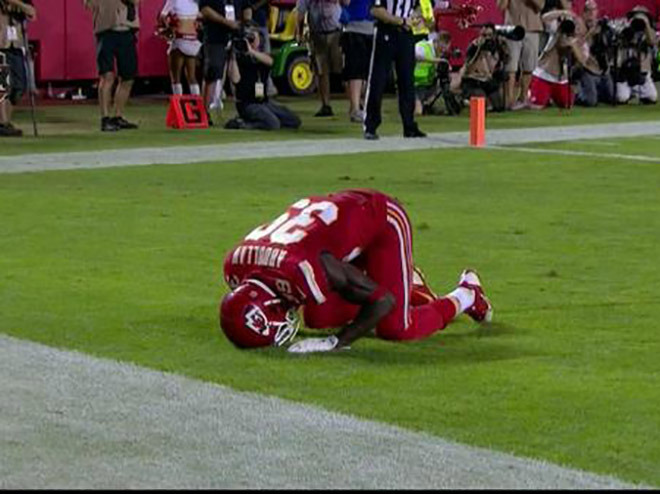 American football is already despised among many Muslims who contend that football shouldn't be played with hands, except if he is the goalie of course. Making matters worse is the incident that took place on Monday night's game, where a Muslim player was penalised for kneeling in celebration towards Mecca.

During the showdown between the Chiefs and Patriots on Monday, Husain Abdullah managed to score a touchdown off an interception from Tom Brady. In jubilation of the rare feat, Abdullah knelt in the end zone in Muslim prayer style to thank Allah for his divine intervention in the match. The only problem is when he raised his head off the ground, instead of finding his teammates celebrating he found an official throwing a yellow flag at him, penalising him 15 yards for "unsportsmanlike conduct."

Immediately many took to the Twitterverse to express their outrage at the ignorant call. In recent years, Football has been cracking down on celebrations after a score, as celebrations became more elaborate and outlandish as superstars competed for best celebration. It became such an issue that any celebration was deemed illegal and would result in a penalty.

So if it is illegal why are people so upset? Well because for some reason players seem to be able to celebrate by taking a knee for Jesus. NFL officiating guru Mike Pereira famously said he would never throw a flag on a player who knelt in the end zone because he “didn't want to get struck by lighting.”

The issue is that the official rule is vague and ultimately a judgement call for the referee to make. For this call to be made during an early season game is odd, considering that during the Super Bowl when millions are watching no call is made for a player taking a knee to thank Jesus.