Can drooling over ice cream, sprinkles, and Rami Malek break our fast? 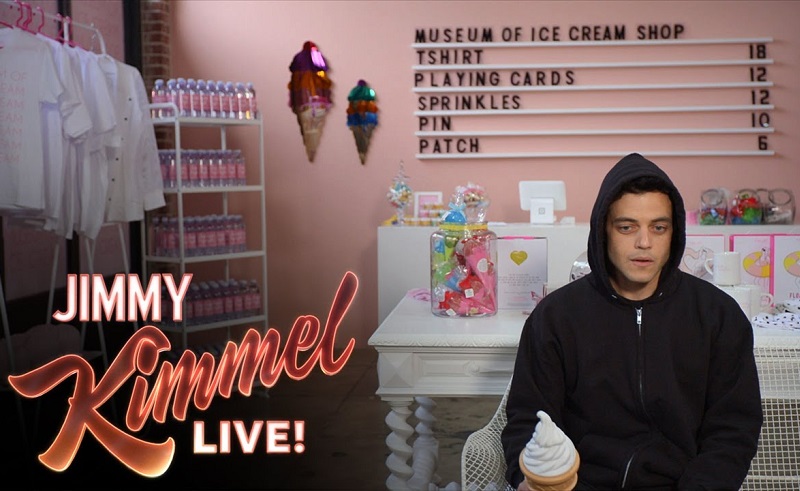 You know who got to go to the Museum of Ice Cream in LA? Not us, that’s for sure, but for a recent episode on Jimmy Kimmel Live, Egyptian-American actor Rami Malek got a golden ticket there. But here’s the catch, he didn’t go as his smoking hot self, he went as his equally hot and much darker alter ego, Elliot Alderson in Mr. Robot, and they filmed it all so you can only imagine how that played out!

In the first shot, he completely ignores the super talkative tour guide and just waltzes in. “How do you make an ice cream museum without completely going insane? Where do you draw the line? Is Gelato ice cream? What about fro-yo? It’s a double scoop of anarchy,” are just some of the existential questions Elliot starts to brood on during his visit.

We don’t know how he managed to stay in character in an ice cream museum, but props to him for keeping a straight face while doing that because who wouldn’t be cheesing hard at a place dedicated to ice cream.

Through a conversation with two random children at the museum, we find out that Elliot is actually at this museum to overcome a personal childhood ice cream trauma of his. Turns out poor Elliot is lactose intolerant, too!

Everything in this museum is ice cream-themed. There’s ice cream-themed art, actual ice cream, a claw machine filled with ice cream plush toys, a room of massive melting popsicle art, and so much more. Oh, and there’s a pool of sprinkles that we get to see Elliot flourish in and make ‘sprinkle’ angels. You can see him coming out of his shell and letting his inner child out in this shot and it makes you want to jump into the sprinkles with him.

Maybe Elliot has finally overcome his childhood ice cream trauma. Maybe he hasn’t. Take a look to see for yourself just how awesome this is and see how the visit to the Museum of Ice Cream ends for the cyber vigilante.