After going nearly 100 years unchanged, Real Madrid have altered their logo after signing a three-year sponsorship deal with the National Bank of Abu Dhabi... 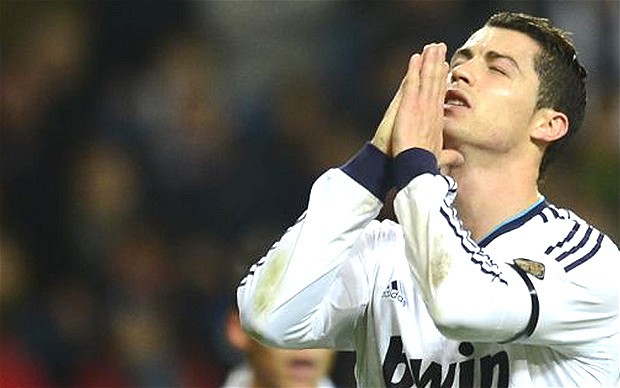 This is the Real Madrid F.C's logo we all know and (some of us) love:

Now, following the club signing a very lucrative three-year sponsorship deal with the National Bank of Abu Dhabi this is what the new Los Blancos logo looks like:

Spot the difference? Yes, in an attempt to pacify Muslim fans in the Middle East they have removed the Christian cross from the top of the logo which has been unchanged since 1920. Now we don't know about you but we're relieved, finally we can watch Ronaldo, Bale et al without feeling like complete infidels.

"I know that the local people experience every match in a special way and that our links with the UAE are constantly growing stronger," Perez said at a conference to announce the new deal. "This agreement will help the club to keep conquering the hearts of followers in the United Arab Emirates."

In all seriousness though, although the logo change may seem like a peaceful olive branch to Muslims everywhere, it only acts to highlight an unnecessary duality between supporters, as if Muslims are not tolerant enough of a symbol on a logo to fully support a team. Just look on the street of any major Middle Eastern city and you will find 50% of the male population dressed up like Ronaldo, cross jewellery and all.

The change is also a sign of the times in today's football world, with teams bending over backwards for corporate gain, willing to sacrifice their own identities as clubs, turning more and more into business enterprises rather than football teams. Barcelona recently broke a 113 year tradition of having no corporate logos on their kit following a sponsorship agreement with Qatar Airways.

And what about Manchester United? Last year the Red Devils announced sponsorship agreements with Commercial Bank of Qatar and Emirates NBD Bank. No more devil?