Researchers Discover a Big Void In The Great Pyramid 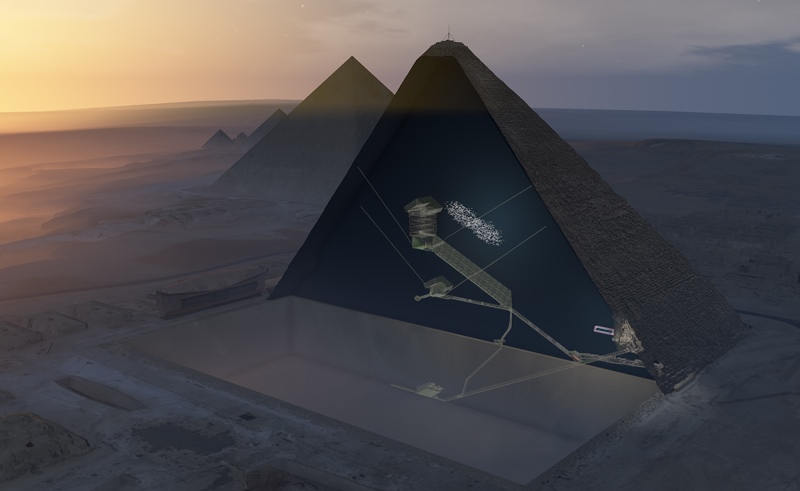 An international team of scientists discovered a 30-metre chamber within the structure of the Great Pyramid, Khufu, according to the Associated Press.

The team said that the void is deep within the ancient structure, which is the only remaining ancient wonder of the world. These findings, which were published in the interdisciplinary scientific journal Nature could be the first major discovery at the site since the 1800s.

It was not immediately clear to the experts what the purpose of this space was, and they still have not determined whether there are any objects inside it. The revelation was made thanks to a type of cosmic-ray scanning using muons, subatomic particles that penetrate deeper than x-rays and depending on whether they are absorbed or deflected, help scientists determine what is stone and what is not.

He theorised that it could have been used for building purposes, as it is located above the structure's Grand Gallery. “In order to construct the Grand Gallery, you had to have a hollow, or a big void in order to access it — you cannot build it without such a space,” he said.

According to New Scientist, the international team is led by Kunihiro Morishima from Japanese Nagoya University. They do not currently believe that there are any internal passages leading to the newfound chamber.

Morishima's team, though, is more optimistic about the importance of their discovery. Mehdi Tayoubi, co-founder of the ScanPyramids project and president of the Heritage Innovation Preservation Institute, says, "this is premier. It could be composed of one or several structures... maybe it could be another Grand Gallery. It could be a chamber, it could be a lot of things."

The Great Pyramid is the most famous structure of its kind at the world, built as a tomb for King Khufu, a pharaoh of the 4th dynasty who reigned from 2509 to 2483 B.C. How it and its siblings were constructed still largely remains a mystery to Egyptologists and scientists.