Showing us that Egyptian humour isn't dead, Revolutionary Penguins have added a much needed light in Karim Rahman's life... 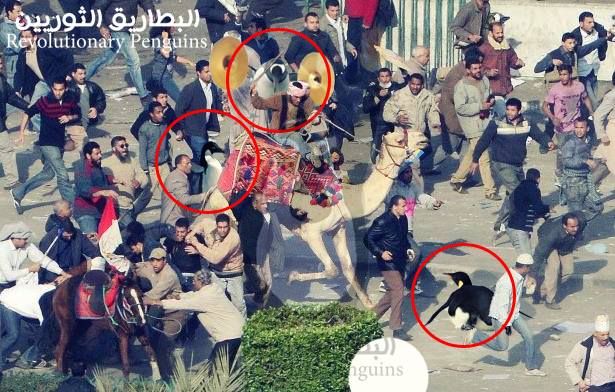 Seeing how things were quite literally hitting the fan the past couple of days (no really, at some point I actually did start throwing things at my fan), it's quite understandable that people are on the edge. Add 16 hours of fasting to the equation, and you can forget all about the renowned Egyptian, happy-go-lucky spirit. I myself have been feeling the effects of such strain on my emotions (I may have found a white hair yesterday and almost died), and listening to Miley Cyrus' We Can't Stop on repeat isn't really helping anymore. So I decided to do what any sane human being would do in these trying times: Google cute animal pictures on the internet.

So, on a fine working day, editor-extraordinaire Dalia Awad decides to alleviate my tensions and send me a link to a Facebook page that combines two things that will never go out of fashion: penguins and revolutions. Ladies and Gentlemen, I introduce to you, Revolutionary Penguins.

AREN'T THEY THE MOST ADORABLE THINGS YOU'VE EVER SEEN?! What are Revolutionary Penguins, you ask? It's exactly what the title describes: penguins in Egyptian revolutions. Remember when everyone was talking about El Taraf El Talet when revolutions became a big thing in Egypt? Penguins are the elusive third party; they've been working incognito all this time, pulling our strings and moving us like pawns in their adorable chess game.

There's really not much more I can say about this (other than the fact that I'm going into a coma from cuteness overload/trying to find someone to stitch my ass back on after laughing so hard). In all seriousness, though, this is what I love about us as Egyptians. We have the ability to turn even the worst situations around with a simple joke. It's our defense mechanism; a survival tool that I think is of the utmost effectiveness. It's nice to see people getting back with their kick-ass Egyptian humour and trying to break the tension that surrounds the country these days. Thank you.

Now if you'll excuse me, I'll leave you to go coo and drool over these penguins and I highly suggest you do the same. Check out the Facebook page here.