With a starting bid of SEVEN MILLION DOLLARS it seems that interest in this disturbing piece of history is high... 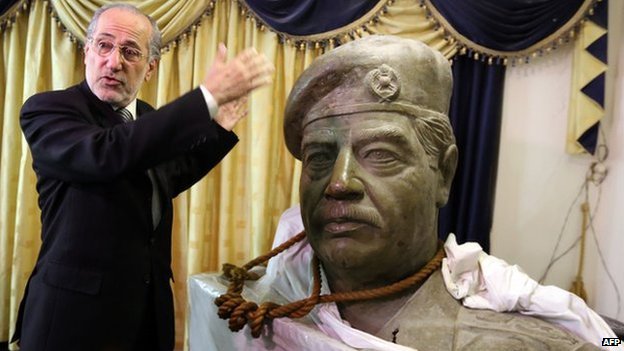 How would you like to be the proud new owner of the rope used to hang Saddam Hussein? This wicked historical souvenir could be yours for a cool $7 million! Pocket change. It’s just like when you’re leaving Disneyland and you pass by the souvenir shop and buy some cute keepsakes to remember the occasion, except not at all and completely weird and morbid, and quite frankly, a little disturbing.

Apparently though, the rope used to execute the former President of Iraq had attracted several potential buyers with bidders from Iran, Israel, and Kuwait all clamouring to get their hands on the macabre memento. Because who wouldn’t want to own the rope used to hang someone? We’d snuggle up to it at night. According to what a senior Iraqi politician told London-based Al-Araby Al-Jadeed site, so far those bidding include an Iranian religious organisation, a wealthy Israeli family, and two Kuwaiti businessmen, and that a purported offer of $7 million has been made. SEVEN FUCKING MILLION. Who just has a spare $7 million to spend on a piece of rope?

The rope in question is currently held by Mowaffak al-Rubaie, Iraq's ex-national security advisor, who had his men bring him a section of the rope and was planning to keep it until a museum was made to house the relics of the former regime. After a 2013 photo that showed the rope draped on a statue of Saddam’s oversized head, this apparently prompted interest in owning in and the bids have just been rolling in since then. We have yet to see how it will play out.