Samsung Galaxy Note 4: The Best of Both Worlds

The all-new Samsung Galaxy Note 4 is out, and in keeping with the legacy of the range, this one provides some of the most cutting-edge features on the market - including a revolutionary selfie camera and a 2.7 GHZ Snapdragon processor… 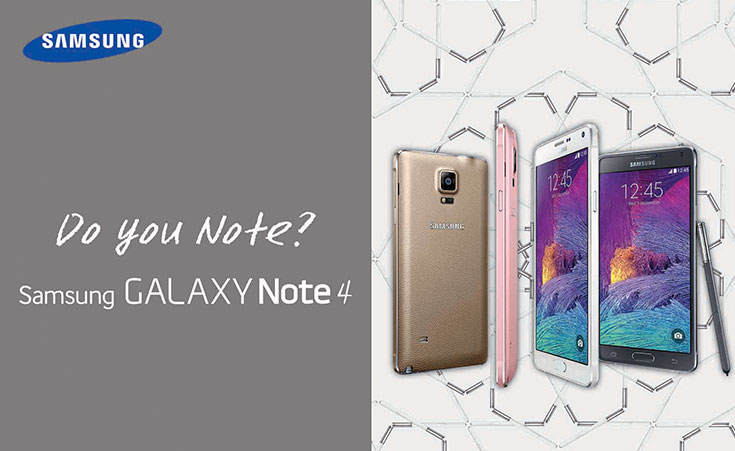 Well, we've all been there - your old phone is on its last legs and it's time to get a new one. But which one to choose? Hows about the nifty little number that doubles as a bloody awesome camera? Launching officially in Egypt with a massive event last week, Cairo's tech-buffs got to know the new top-of-the-line device, as well as Haifa Wehbe's sultry side as the Lebanese dive took to the stage at the big party.

The Samsung Galaxy Note 4 is the latest innovation from the company that has been on the top of the technology food chain for a few years now. The latest reincarnation of the phablet (not quite phone, not quite tablet), sees all of the functionality and fun people have come to expect from the Galaxy range, elevated for glorious results. The Note 4 packs a punch with a blistering 2.7 GHZ Snapdragon processor and a hefty 3 GB of RAM, meaning you can finally have those 2939393 ever-so-important apps open at once. But the real amazement comes from the new stuff, like a 3.7MP front camera (a whopping 16 megapixels at the back) with a revolutionary new Wide Selfie mode, meaning you can finally cram in all of your best pals into that all-important group shot. This works by centring your photo, then tilting the phone once to the left and once to the right, essentially taking three pictures and creating one glorious panoramic one. Here's one we took earlier:

Do you even selfie, bro?

The Note 4 isn't all about photos, however, as it also records video at a pretty snazzy 30 frames per second, meaning you too can be a budding Spielberg in no time. The phone comes with the all the usuals, including Wifi, GPS, Bluetooth and a whole host of other applications, including a finger print scanner for added security - we've all seen what happens when phones get hacked.

It goes without saying that the Note 4 runs on Google's super slick Android 4.4 and for those of us in Cairo - the noise cancellation mic is an absolute must. Meanwhile, all of these features and more are compatible for Samsung's new wearable technology range - Samsung Gear - for the Inspector Gadgets among us.

For more information and to get your hands on this brilliant new device, check out Samsung Egypt on Facebook here.