The Arab world is about to get a crash course in akhla2 el ninja, Egyptian style, as Saudi Arabia's Prince Faisal Bin Bandar brings the hit reality series to the Arab World... And 2om El Donya is hosting! 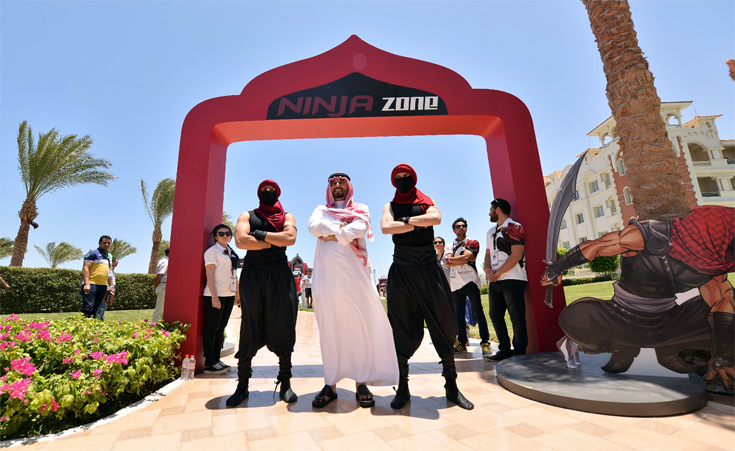 Some people read this title and pictured their TMNT childhood; others pictured Bruce Lee and Jackie Chan, and we're sure there's at least this one guy who yelled '2ayna 2asheya2i!' at the top of his lungs. High five, 2ayna 2asheya2i guy - heya di akhla2 el ninja. While no one will be appearing out of thin air in search of 2ashya2 ommo, a bunch of athletic badasses from around the Arab World will be duking it out right here in the motherland this November for the first of four seasons of the renowned reality show Ninja Warrior - except now it's happening Bel3arabi. Sahl Hasheesh is abuzz this weekend with celebrities, ninjas, and Saudi Prince Faisal, who bought the rights to produce the international reality show for the Arab world, as Ninja Warrior Bel3arabi launches in Il Gusto Sahl Hasheesh. Aside from the specimen of Saudi royalty that's gracing our Red Sea town for the celebratory launch weekend, we've been on the ground and hanging out with plenty of big names in the Egyptian cinematic world here to celebrate the new addition to Arabic television. Like who, you ask? Oh, you know, Razan El Moghraby, Ehab Tawfeek, Ghada Adel, Tamer Hagras, Hisham Abbas, Mohammed Lotfy, Reham Haggag, and Abeer Sabry. Plus there's Ahmed Abdallah, Governor of the Red Sea Governorate, and word around La Piazza is that Nancy Ajram and Mohamed Hamaki will be performing tonight. Now, back to Ninja Warrior Bel3arabi; set to film inside the Hurghada resort town (which is wicked for tourism, by the way) and broadcast live under Director Magdy El Hawari, the reality show that's travelled from Japan through the States, England, and Germany will start with 240 contestants from around the Arab world vying for the title of Arabic Ninja Warrior. The exclusive word around the Scene is that Yara Shalaby and her team of Gazelles will be among the badasses participating in the competition. What will they have to do to win? Contestants have to work their way through stages of obstacles that challenge their strength, stability, speed, balance, and endurance. To win the sports entertainment competition show, the contestants must complete all four stages. We can't help but wonder how well our team would do – could any of us be the next Arabic Ninja Warrior? We'll watch the first season in November and then consider competing. For now, we're just hanging out at the launch party in beautiful Sahl Hasheesh. Head over to our Instagram and Snapchat (cairoscene) for all the behind-the-scenes exclusive footage, including these guys: