A nail-biting stunt by lion tamer Mohamed Elhelwe has the whole world talking. 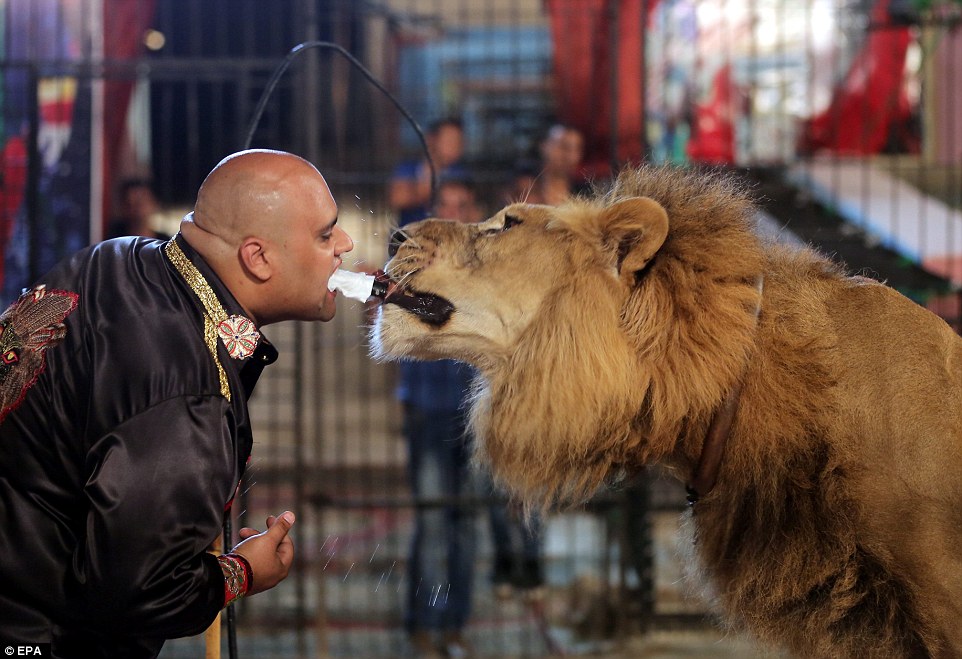 It isn’t often that circus act in Egypt goes viral around the world, but that is exactly what is happening after Mohamed Sayed El-Helwe shocked audiences at the National Circus performance in Marsa Matruh, west of Alexandria, with his latest death defying stunt.

Under the spot light of the Big Top, an animal ‘trainer’ by the name of Mohamed Sayed Elhelwe enters a cage, donning his embroidered black jacket preparing to stun audiences with a face-to-face encounter with a lion. El-Helwe forced the lion to perform a number of tricks, but none as heart-stopping as when the lion tamer put a knife in his mouth and fed the lion. Inches away from ferocious cat’s razor-sharp teeth, Elhelwe managed to perform the stunt without incident, and the photo from the show went viral.

Established in 1966, the Egyptian National Circus was the highest income earner within the Ministry of Culture’s performance arts division. Its allure and downfall began with the death of one of its most important fans, Former President Gamal Adel Nasser. With his passing and a breakdown in Russian relations in the 70s, the circus deteriorated, creating only worse conditions for the already abused animals. The El-Helwe family is famous for being lion tamers, but when they make global headlines it usually because karma strikes... Or rather lions maul their trainers. The last mauling incident took place in February of this year, when Mandy the lion had enough of life behind bars and turned its claws on renowned Egyptian Lion tamer Faten El-Helwe during a performance in the Delta city of Tanta.

Tortured animals in captivity forced to perform tricks should not be considered entertainment, and definitely should not be pushed by media as such. Hopefully this act will receive more criticism than praise as many animal activists around the globe demand their closure.

If you want to learn more about the history of How Animal Torture Became Family Fun, click here.