Shut Up Your Mouse Tamer Amin

In a distasteful display of apathy, TV personality Tamer Amin blames the victim of horrific sexual harassment in Cairo University. Unsurprisingly, this isn't the first stupid thing he said... 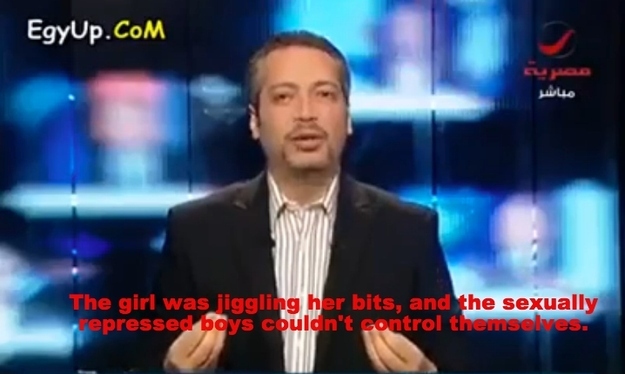 Whether we like it or not, Egyptians appear to the world as a bunch of sexual harassers. Obviously that isn't the case for all Egyptians but unfortunately no matter how many sexual harassment awareness campaign are launched, the message falls upon deaf ears, especially when a video showing a mob of law students trying to collectively sexually assault a classmate for wearing a tight sweater and pants with ridiculously fake looking blonde hair. Sadly this is what transpired yesterday at Cairo University's faculty of law.

What transpired was horrific and disgusting, but equally as bad as the reaction from authority figures and media personalities. It is absolutely unacceptable when an incident like this happens on campus and the University Dean, Gaber Nassar, takes to the airwaves to blame the victim. Nassar spoke on Monday with ONTV, explaining that the victim was wearing "inappropriate clothing." This resulted in retracting his statement apologising for the supposed "misunderstanding," clarifying that both the male harassers and the woman would be punished and possibly expelled for breaking university rules. Of course, that statement also had to be revised and the Dean later denied the victim would be punished. It is hard to trust a man this insensitive and incompetent to meaningfully publishing all those involved. The last thing Egypt needs is lawyers who can't understand something as fundamental as human rights and dignities.

Just when you thought this story couldn't get any worse, in comes Tamer Amin and his stupid mouth taking the side of the Dean and slandering the victim calling her a hooker. It isn't clear why this man is popular, or why anyone take his opinions seriously. It is in CairoScene's opinion that this man looks like a sleeze-bag and should consider dressing more moderately. By unbuttoning his top button, he is just screaming to be sexually assaulted by a mob. Also alarming is the fact that at no point has it been confirmed whether or not he is actually wearing pants during his broadcasts.

Here is a clip demonstrating this idiot's capacity for verbal diarrhoea.