After a grueling bootcamp in Gouna, the final 30 contestants of the Student DJ Program have been whittled down to 12... 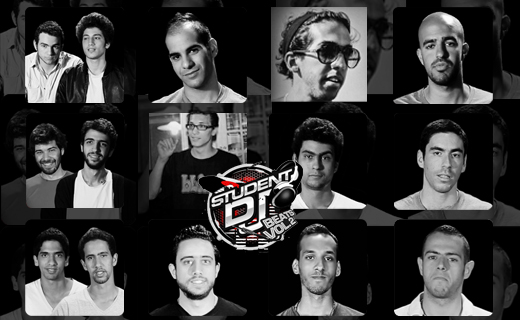 After a grueling week holed up in an El Gouna villa for the bootcamp portion of the Electrum Records’ Student DJ Program, 30 DJs have been whittled down to 12.  All week-long they were trained, schooled and set about spinning with the internationally-acclaimed likes of Aly & Fila, Jamie Griffiths and Joseph Hipkin. Together with Electrum Records founders Ahmed Fahmy, Nadia AbouTaleb and Hany ‘DJ Samba’ Sadek, the mentors made their cuts and dubbed a dozen deck-dazzlers victorious.

“The bootcamp was incredible,” said Amr Khaled, one half of DJing duo Fulltone, who made it to the top 12. “We learned so many things from production techniques to mixing and scratching! And of course it feels great to be among the finalists. It’s a new experience for us as we've been working in the studio for years and it just feels great to take our music out to the world.”

Niazi, who also made the cut, was equally as effusive about the experience, “It exceeded every expectation I had in my head. They had everything prepared and all was set in motion. It was up for the contestant to take the challenge and keep up with the instructors.”

These 12 spin-masters-in-training will go on – two by two – to battle it out atop of the rooftop of the Fairmont Nile City every Friday from now until July 3rd, each trying to prove they’ve got the chops to become chart-toppers, club-fillers and perhaps, one day, superstar DJs.

A similar Electrum Records battle-style project last year – dubbed Red Beats – saw the winner Baher Eid go on to become one of Egypt’s most sought-after DJs currently on the brink of taking his talent global. Armed with that knowledge, the competition is officially heating up. Round One kicks off this Friday May 10th with Mostafa Emad, an Indie, Tech and Deep House producer going up against experienced House and Trance DJ John Damien who was once ranked 29th in the Middle East by DJ Mag. Headlining the night will be Deep House/Indie Dance DJ and owner of the record label Sleazy Deep, Rob Made all the way from London. Stay tuned to the CairoScene calendar for all the updates live as the competition progresses and in the meantime here’s the detailed breakdown (in no particular order) of your official top 12:

Youssef El Aguizi and Yehia Fahim: Aguizi hails from Egypt and is one half of the production team Aguizi&Fahim. The 18 year old DJ and producer has been blazing trails in his native Cairo where he has been a fixture DJing on Nile FM, Egypt's biggest radio station. His young age and impressive sets have garnished him a massive following which has pushed to start producing his own music. He now has releases with Tronic B7 Records and Digital Vinyl Recordings which have received major support from DJs throughout Europe and has made him one of the most recognisable names in dance music in the Middle East.

Fahim is a talented young producer from Cairo and half of the production team of Aguizi&Fahim. A naturally gifted musician, this 17 year old phenomenon has been creating music since he was six years-old. As a child his home reverbed with the sounds of Chopin, Mozart and Beethoven and he quickly took his classical training and passion for music straight to the studio and began shaping his sound. In 2010 influenced by the sounds of big European Trance records he released his first single which gained him underground acclaim amongst Trance fans and poised him to be considered one of the hottest up and coming dance music producers in Egypt.

Mostafa Emad: Unremittingly shaping his own sound with a strong will to achieve his goals, Mostafa Emad, 23 years old DJ/Producer became the person he is today. Being an integral part of dance floors all around Cairo since 2004 till 2009, Mostafa rises up to take on the music scene with his ability to manifest musical revelations in the form of mixes.

John Damien: John's technically brilliant, distinctly unique mixing style and energy behind the decks is what has got him moving forward so fast. Getting more in touch with his abilities and deep passion for spinning, John got certified from Ministry Of Sound London by Andy Woods and started producing but is waiting to be done with his tracks to be released in the perfect time.

Youssef  ‘ Jo’ El Ahwal: Started to play music since he was a child as a guitar player, until he got more into Dance music. His interest for sounds, tunes and beats developed during the years spent listening to everything from Progressive, Deep House to Tribal and Trance.

Fulltone: Fulltone is the story of Youssef Hegazy and Amr Khaled's journey through the rich world of electronic music. It is the merger between two young talented Egyptian artists who have been producing music since 2006; an amalgamate of sounds of what they say: "are extensions to what they hear in their head''. Expect an unexpected avant-garde Deep Tech and Deep House style out of these two.

Niazi: Inspired by music and journeys at a young age, Yousef Niazi’s motivation to bring both together and elevate people's perspective of electronic music has never ceased. “Genres? Don't even know where to begin. You just match the surrounding energy and vibes.”

Saleh Amin: Growing up on an eclectic diet of Funk, Disco and Pop music provided by his parents’ record collection, Saleh is hard to pin down musically. Inspired by his family’s love for music, Saleh took up piano at the age of 14. It was only a few years later that Saleh discovered electronic music and since then he’s been hooked to its addictive rhythms. Saleh promptly purchased his first DJ set and began performing at local house parties, basements and clubs.

Seif Beibars: Born in 1988 with a clear passion for music, Seif picked up guitar lessons at his local school but failed miserably at it. He picked up the drums a year late but also failed miserably at it. Five years later, in 2002, Seif had already began listening to Dance music and started attending parties religiously. Since then Seif has been mixing Dance music together with his close friends, always pushing the boundaries for what is deemed to be acceptable by the masses.

The Gawdat Brothers: (no bio available)