Latvia-based Egyptian entrepreneurs Mohamed Ghaith, Qusay Ali, and Mohamed Nasri have developed a drone that can be folded, stored in a pocket, and - possibly - used in Egypt. Here's how... 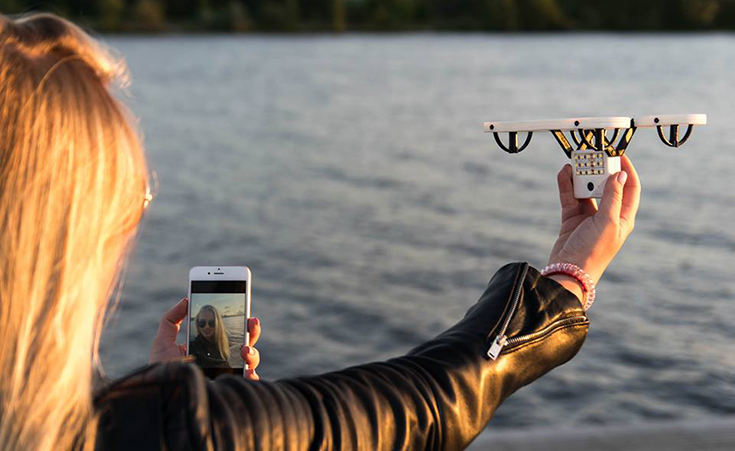 “Drones were mainly used by the military before, but it's now time to get into it,” says Mohamed Ghaith, co-founder of Drofie. The startup, based in Latvia, has developed a smart, folding drone that can take photos, film, auto-follow, live-stream, and capture 360º panorama shots. And can be stored in a pocket.

“The idea was sparked by a funny anecdote,” says Ghaith. “My best friend is always carrying around a selfie stick in her bag and wherever we go she takes selfies - with food, in the street, in cafés, simply everywhere. I just thought 'why would a person carry metal stick around all the time instead of using a drone?'” After initial research, the entrepreneur discovered there was a gap in the market. “All Nano drones available are not stable enough to capture stable, still images,” he says.

So Ghaith, a university dropout who used to dedicate his days and nights to avionics engineering, came up with the concept of Drofie. Together with Qusay Ali and Mohamed Nasri, the entrepreneur developed the concept that could tap into an industry worth $4 billion. “I have had many failed startups and I learned that timing is very important,” Mohamed says. “Now is the right time for a drone business; the sector is growing and is expected to be worth $5.59 billion by 2020,” he says.

In Egypt, obtaining permission for using drones can be extremely challenging, and importing them is illegal, but Gaith and his partners have devised a strategy to dodge the barriers. “As of today it is illegal to import drones to Egypt. However, since Drofie is an Egyptian startup, we are trying to propose to the government that we can make a batch of Drofies that can be controlled within a range of 20 metres from the source (that is, your smart-phone). Since the main reason behind forbidding drones in Egypt is privacy, by limiting the range to 20m or less, the user can only capture himself, not someone else,” he explains. The device, a small, 140g drone, is regulated by the Federal Aviation Administration (FAA) and has a fully autonomous hover camera, so it hovers where you leave it in the air and can follow you around. The entrepreneurs self-funded their way into the market, but recently joined the Kickstart accelerator in Switzerland, after pitching against 865 participants and winning 25,000 CHF ($25,428). “From August 22nd, we will be in Zurich for an 11-week programme of intense building, learning and networking. Most of the development will take place in The Institute of Robotics and Intelligence Systems (IRIS) in Zurich,” says Ghaith, as he unveils the company’s aim to raise $100,000 as preparation for the kick-starter campaign.

Although some look at Ghaith’s initiative with skepticism, the entrepreneur has incredible experience under his belt to power through difficulties and push his project forward. “The strangest reaction to my idea came from my father. I told him as soon as I had my ‘aha! moment’ and I received a continued full five minutes of sarcasm,” he says. “His first comment was: 'you are making a spy camera and you will destroy your future and go to jail - stay away'. But we kept at it, and we made it to Switzerland!”