A US national was jailed in April for making a spoof film about the UAE's lifestyle and his cast and him have still not been released. 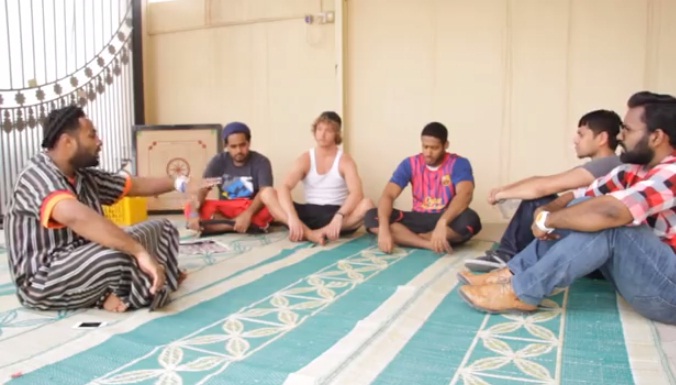 A US national living in Dubai has found himself on the wrong side of the law after posting an MTV-style spoof video mocking local culture.

Shezanne Cassim, 29, was arrested in April this year, over the video which centres around a fictional 'Satwa Combat School.' The controversial clip entitled Ultimate Combat System: The Deadly Satwa Gs first surfaced on social networking sites and created a storm as the video went viral across the globe.

The 20 minute movie, which begins with a caveat claiming that the flick is not intended to cause offense to the UAE, pokes fun at youth culture within the Emirate and features would-be 'gangstas' learning the ancient art of shoe throwing and using social media as a back up in battles.

However government officials failed to see the funny side and are still holding Cassim, in an Abu Dhabi prison alongside eight other expats caged in connection with the clip.

Cassim's brother told CNN: “"It's just a straightforward silly comedy video. And he's being treated like some sort of dangerous criminal, high security criminal that they need to keep under maximum security conditions."

The movie first surfaced in October 2012.Cassim has been charged with using the Internet for items "liable to endanger state security and its higher interests or infringe on public order." Supporters have taken to social media sites in support of the popular film maker.

One poster said: "Lol funny as shit, sucks the poor guy went to jail for this."

Meanwhile another added: "Free this man. Why is he in jail, he didn't do shit."

UAE officials have so far stayed silent on the matter but one wonders how much longer before the oil rich state can lock up a group of young entertainers for little more than entertaining the masses.

Some might say 'UA need’ to get a sense of humour, guys.