When two topless activists stormed an Islamic conference, the biggest shock was how they were removed. 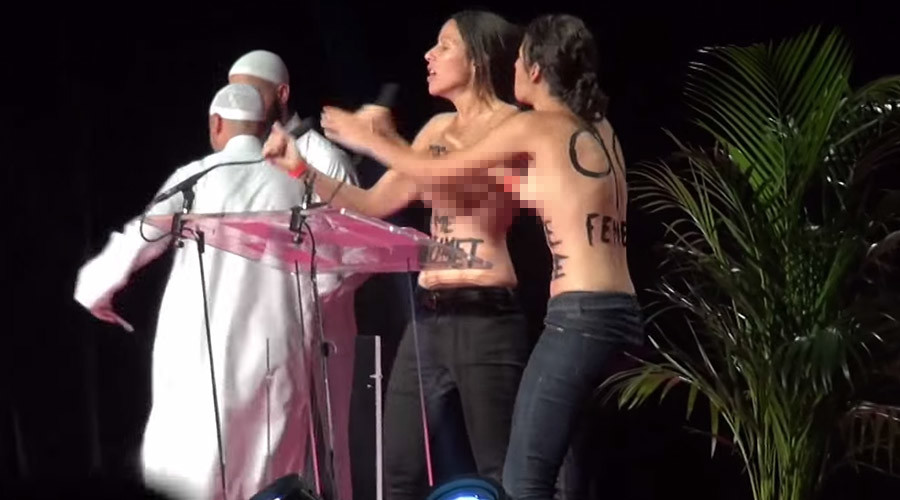 A Muslim conference in Pontoise, Northwest of Paris, turned extremely ugly, when two topless FEMEN activists stormed the stage only to be a dragged and beaten off.

The incident occurred this past Saturday, when the two imams on stage were discussing violence against women. While debating the subject, two topless FEMENists stormed the stage protesting against ‘womanophobia’ and a woman's place in Islam. Either way it seemed that the Imams both had no problems with the way a swarm of ‘security’ handled the woman, dragging them and going so far as kicking one of the women while on the floor.

Security removing people who storm stages isn’t anything new, however the rough way in which they were handled, and the beating they received is totally unacceptable, and likely the reason the video is going viral.

According to the FEMEN Facebook page, “FEMEN is calling for mass opposition against the uprising of those womanophobe integrisms and for a strong answer from our institutions. Womanophobia is illegal. Sexism is a kind of racism. Modern slavery is a crime. Let’s condemn them together, and let’s remind them without ever losing any ounce of strength: No one can enslave me, no one can possess me, I am my own prophet!”

The Facebook page has dubbed the two feminists “our topless jihadists.” The topless crusaders where detained by police immediately after, but were released later that evening. Allegedly the organisers of the debate have announced plans to file a lawsuit against the activists.

Here's how social media is reacting:

Answer from a #Muslim woman to @FEMEN_Movement @Femen_France @FemenSpain Do you want to help us? Listen to us #Islam pic.twitter.com/7hYvTc0t5N

Actually, my first thought about this has been WHY the fuck is a &quot;muslim conference on women&quot; going on in France???&#10;&#10;https://t.co/k0NN7TNwMi

Feminists stormed a Muslim conference in France, shouting: &quot;We&#39;re our own prophets!&quot; Then they got battered.... pic.twitter.com/IAy0maS7R9