After Russia invades Ukraine, a humanitarian crisis ensues. But it also triggers a crisis of another kind in Egypt: one not of war, but of food. Here's how Egypt is tackling its sudden wheat shortage. 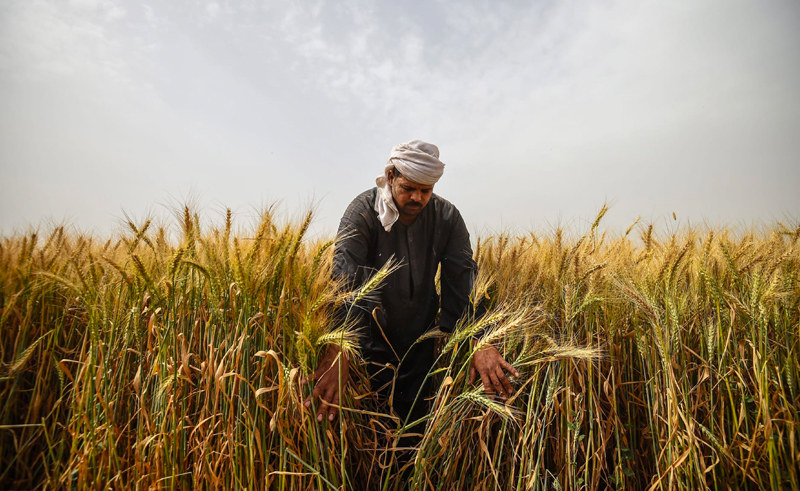 Egypt is the largest importer of wheat in the world. Russia is the largest exporter of wheat in the world, with Ukraine coming in fifth on that same list, according to the Food and Agriculture Organization Corporate Statistical Database. Egypt in particular gets about 80% of its wheat supply from these two countries alone. So what happens when Russia invades Ukraine, with all the humanitarian crises that come with it? Egypt gets thrown into a crisis of its own. One not of warfare, but of sustenance - a race to circumvent widespread hunger from the looming threat of bread shortages.

Even before the outbreak of the war, economists have been able to take note of the tensions between Russia and Ukraine and offer fair warning that any conflicts between them could lead to great uncertainty in Egypt. Indeed, the Minister of Supply and Internal Trade Ali Moselhy spoke openly about such concerns during the opening of an experimental centre with the Assiut Chamber of Commerce, sharing assurances that Egypt held a strategic reserve of wheat that could last for around five months - a statement made in early February, when Russia was still amassing hundreds of thousands of troops along Ukraine's borders.

Shortly after Russia announced its military campaign on February 24th, the Ministry of Supply and Internal Trade announced a new international tender to import wheat on February 26th, and a shipment of 60 tonnes of Ukrainian wheat left the Yuzhny port en route to Egypt on February 27th as part of an order made the previous December. But in the meantime, trade was becoming increasingly disrupted, investments were slowing down, and the regular citizens on the street were starting to feel the effects of the war. Bread was already a heavily subsidised item, given to 70 million Egyptians every day. And while subsidised bread stayed at a steady 5 piaster per loaf, the price of unsubsidized bread began to rise based on the price of flour. The price has been reported to go up from 50 piasters to 75 piasters - a 50% increase. A costly expense for the 30% of Egyptians living under the poverty line.

With the threats of random price jumps weighing on people's minds, President Abdel Fattah al-Sisi ordered for the government to conduct a series of studies to determine a fixed price for unsubsidized bread, which was ultimately set at 75 piasters for a 90 gram loaf. The command was made to help stabilise people's worries ahead of the Holy Month of Ramadan, when the Ministry of Supply and Internal Trade, the Egyptian Armed Forces and the Tahya Misr Fund are set to distribute boxes of staple food amongst low-income citizens.

Around the same time, the Ministry of Trade and Industry implemented a ban on the export of wheat, alongside many food staples like corn, lentils, fava beans, pasta, flours of all kinds and cooking oil for three months.

Although the Prime Minister claimed that Egypt saw a smaller increase in wheat prices (17%) compared to the rest of the world (48%), more work needed to be done. As Egypt buys 126,000 tonnes of wheat from both Russia and Ukraine (63,000 tonnes each), and another 126,000 from France and Romania, the Ministry of Finance, the Ministry of Agriculture, and the Ministry of Supply and Internal Trade made a decision to increase wheat production at home.

Normally, Egypt would produce about nine million tonnes of wheat, which is just enough to feed 50% of the population. The ministries announced incentives to farmers with the hopes of ramping up wheat deliveries by over two million tonnes throughout 2022. After 3.65 million feddans of wheat were planted - with the government having supplied farmers with seeds and fertilisers - the National Wheat Campaign announced that Egypt's local wheat production could reach at least 10 million tonnes.

The various ministries then approved the decision to increase the procurement price for wheat, awarding farmers with EGP 820 for every 150 kilograms, and start Egypt's wheat harvest season two weeks early, encouraging farmers to sell them wheat starting April 1st instead of mid-April.

But while these incentives pushed production onwards, Egypt's agricultural capacities are ultimately limited, in part due to urbanisation, and in part due to how long it takes to reclaim desert land - much too slow to address a crisis such as this. According to the Ministry of Agriculture and Land Reclamation, Egypt expects to achieve 62% self-sufficiency by the end of the year, mostly due to ongoing efforts to transform desert into farmland. A big improvement, but not enough to account for the demand for wheat. They still needed to look outward to ensure enough wheat for the whole population. Which brings them to India.

As of the time of writing, India is in final talks to export wheat to Egypt. While India is the second largest producer of wheat, cultivating 14.14% of wheat worldwide, the country only accounts for less than 1% of wheat exports, mostly shipping them out to nearby nations like Bangladesh. In recent years it has started expanding their reach to Yemen, Qatar, Afghanistan and Indonesia. With the war between Ukraine and Russia approaching its first month, India has seen the opportunity to enter new markets, filling a void that Russia and Ukraine have left behind with the likes of China, Turkey, and Iran.

The longer the war in Europe rages on, the more the rest of the world shifts around them out of necessity - to the point of creating new global ties between nations. And while some may see it as a silver lining, adapting to circumstances beyond one's control, it raises the question of what the world could look like after the war concludes - and what will be left for the survivors to come back to.