Why Movies About Egypt are Filmed in Morocco

Once upon a time, Egypt was a world leader in the film industry. Fast forward to present days, and movies about Egypt are now being made in Morocco, leaving Egypt without much-needed jobs, American dollars, and tourists. 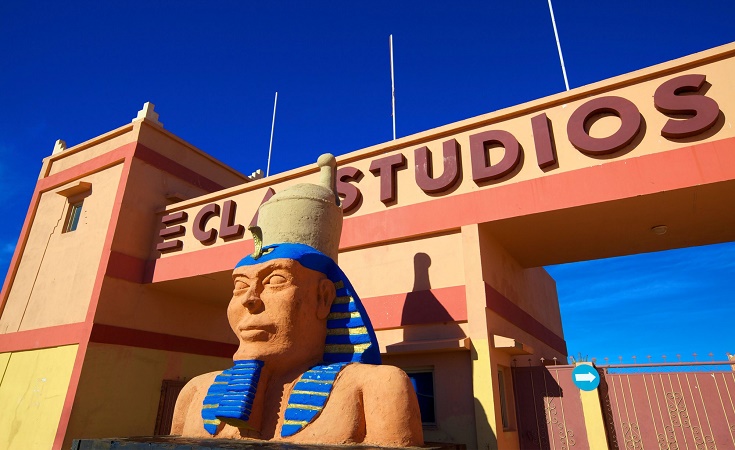 The world is absolutely fascinated with Ancient Egypt, and capitalising on this passion are the international TV and film industries. The almost constant adaptation of Egyptian mythology in film and TV should create a source of revenue for Egypt, but embarrassingly doesn’t. Instead of shooting on location in Egypt, studios opt to film a lot of their films in Morocco and a few other countries. With news that yet another TV series surrounding Tutankhamen is set to premiere on ITV next week,which was once again not filmed in Egypt, we decided to look into why projects set in Egypt are filmed outside of it time and time again. Egypt was once at the forefront of the film industry, not just regionally, but internationally, with silent films appearing in Om el Donya as far back as 1896, although some critics contest that the first motion picture debuted in 1907. At the time, Egypt was so influential that the first ever Hollywood premiere, Robin Hood starring Douglas Fairbanks, opened in Hollywood’s iconic Egyptian Theatre. With the introduction of sound in film, Egypt continued to evolve with the industry with the notable Talaat Harb financing the creation of Studio Misr in 1936, which at the time was on par with any of Hollywood’s major studios. It may have been the establishment of this industry in Egypt that attracted Cecil B. Demille to do his epic masterpiece The Ten Commandments. According to Peter Lev’s Transforming the Screen, DeMille’s decision to film in Egypt was based on the fact that labour and materials were cheap; the epic tale would be best visually captured where the story originated and provide large-scale photography in Egypt that would create a visual spectacle of a destination many around the planet dreamt of visiting. Some modern critics may argue that shooting in Egypt was safer back then, as it wasn’t plagued with the political instability that exists today. However, the film was shot just after King Farouk was removed by a military coup. Acknowledging the importance of having this project filmed in Egypt, General Naguib reached out to Demille to quell any fears of filming in Egypt, a decision that was also supported by Gamal Abdel Nasser. Shortly thereafter, President Nasser decided to nationalise the film industry, which some identify as the moment the industry began declining, creating a bureaucratic nightmare anytime a studio seeks permission to shoot on location.

As of 2015, the procedure to obtain permission to shoot requires filmmakers to apply to the Cinema Industry Chamber and Cinema Syndicate with the names of the crew. The Cinema Syndicate then informs the General Directorate for the Censorship of Artistic Works (GDCAW) that it has approved the crew. The next step requires the screenwriter to sign over the script to the producer at a public notary office, which then sends the script to the GDCAW. Once approved by the Directorate, the Interior Ministry’s Public Relations Sector is then informed if outdoor shooting permits are required. To obtain a 20-day permit, all documents must be sent to Interior Ministry and the permit fee paid. If one of the proposed locations for shooting falls under state control, then another permit is required from the ministry in charge of the location. Once the film is produced it then needs to be sent to the GDCAW in order to acquire a screening permit.

This may seem like a bureaucratic nightmare for international studios but, actually, the process is even more complicated for Egyptian filmmakers who also need to abide by the countless regulations set by the Cinematic Syndicate. Even if an international studio manages to acquire all the permits, it doesn’t necessarily mean the movie will be screened in Egypt. In the case of Ridley Scott's Exodus, the GDCAW decided to ban the movie for being historically inaccurate.

Recognising that Hollywood loves churning out Egyptian and Arab-inspired films, Morocco seized the opportunity to cater to the ever-growing industry to become one of the most important film centres in the world. Whenever Hollywood has needed to film in a desert or an Arab country, Morocco became the default location to shoot with a noticeable increase in productions taking place in the late 90s. Take the movie The Mummy starring Brendan Frasier – it was decided that it would be easier and cheaper to film in Morocco and build sets and use CGI to make it look like Egypt. "We had to do a great amount of work in a relatively small amount of time," says Mummy co-producer Patricia Carr to Filmscouts.com. "But after meeting with the local city officials, we were able to get medical cover in place, as well as arrange all the catering and transportation allowing us to complete everything in record time," she explains. The movie was so successful it spun off into a trilogy, none of which was shot in Egypt.

This trend is only getting worse, as now TV shows are being adapted to tell interesting stories that took place during Egypt’s modern history. In the new popular TV series The Night Manager, starring Hugh Laurie, the show begins and ends in an Egyptian hotel during the Arab Spring. Egypt has plenty of breathtaking hotels, but instead of showcasing them, the series was shot in a Moroccan hotel with scenes of the Egyptian uprising spliced in. Every time a film set in Egypt isn't filmed in Egypt, it is a lost opportunity for job creation and much-needed dollars.

One of the reasons Morocco is so attractive to studios is because the country recognised the demand, streamlined the approval process, established security, and developed the infrastructure to support filming multiple projects in a year. The city of Ouarzazate is considered by film insiders as Morocco’s Hollywood. It is a desolate city that has become the major studios' preferred destination for filming any movie set in the Arab world since Ouarzazate is home to two film studios: CLA Studios Morocco and Atlas Corporation Studios (the world’s largest movie studio). Whether you are making a film about the Iraq war, Ancient Egypt, or even Sex and the City 2, these studios provide projects with all the resources, equipment, and Arab actors required for an ‘authentic looking’ film.  Everything from accommodations to transportation has been sorted out, making filming logistically easier than shooting in a random desert and trying to figure how to get the cast and equipment there.

Another factor that may be swaying film executives’ decision to film in Morocco over Egypt is a matter of insurance. In the politically unstable climate that currently exists, cast and crew insurance would cost infinitely more in Egypt than in Morocco. This may be the toughest problem for Egypt to overcome as Morocco avoided the ‘Arab Spring’, while Egypt continues to search for stability in its aftermath and is currently suffering from a lack of foreign currency reserves from an all-time low in tourism.

One way of solving this increasingly troubling problem would be for Egypt to follow the example set by Morocco and begin removing the restrictions set by the Syndicate and the Censorship Board. As it stands, every other month Egypt talks of building a new capital or medical city, which are arguably good ideas. However, establishing international film studios that cater to filming the countless Egyptian epics churned out every year would provide plenty of local jobs, an influx of American dollars, decrease the amount of ‘whitewashing’ occurring in films set in the Arab world, and reignite the passion the world’s tourists once had for this historically important civilisation.