Today in Shapes: Egypt is ‘Officially’ the Squarest Country on Earth

A more pressing matter than anything you have going on to be sure. 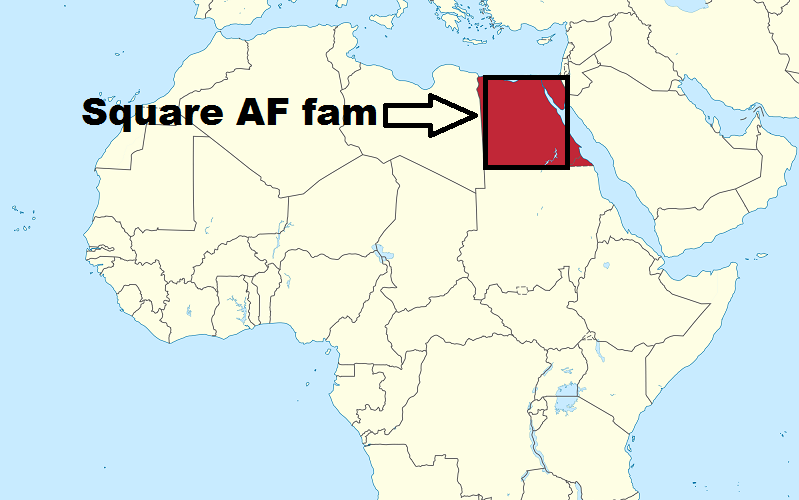 Rarely does any sort of scientific discovery change our worldview than something as riveting as shapes. Shapes are fun, educational, sometimes delicious, and can do wonders for your minimalist web-design approach. Thanks to the astute observations of some of the world’s finest shape-finders (also known as scientists), Egypt is now (and hopefully forever) the squarest country on earth. No, friendos, not squarest as in most boring; it is literally the closest country on the face of this earth to resemble a good old-fashioned square. How is this possible? Well according to Australian geo-statistician (let’s just make up jobs) David Barry, Egypt’s eastern and southern borders are virtually straight. Add to that the almost straight appearance of the Mediterranean coastline in the north, and the teensy bit slanted borders of the Red Sea shore in the east, Egypt squarely scores a near-perfect 0.955 out of 1 on the coveted ‘rectangularity’ scale.

Other findings from various (and totally legit) scientists around the world, with regards to geography and shapes anyway, concluded that Sierra Leone is the roundest country out there. Were it not for the little nipple, it would almost be a perfect-ish circle. Closely following our innate square-ness is the Vatican; it comes in at about 0.948 out of 1 rectablops (that’s our term, not theirs). Egypt has been home to many impressive squares. For example, did you know that if you look at the pyramids from a top-down angle, you’ll see squares? Why do you not see what is in plain sight, Dina?