Get an Interactive Virtual Reality Tour in Nefertari's Tomb

Kind of like a time machine, Experius VR and Curiosity Stream have found a way to replicate QV66 into a virtual reality tour in the Valley of the Queens. 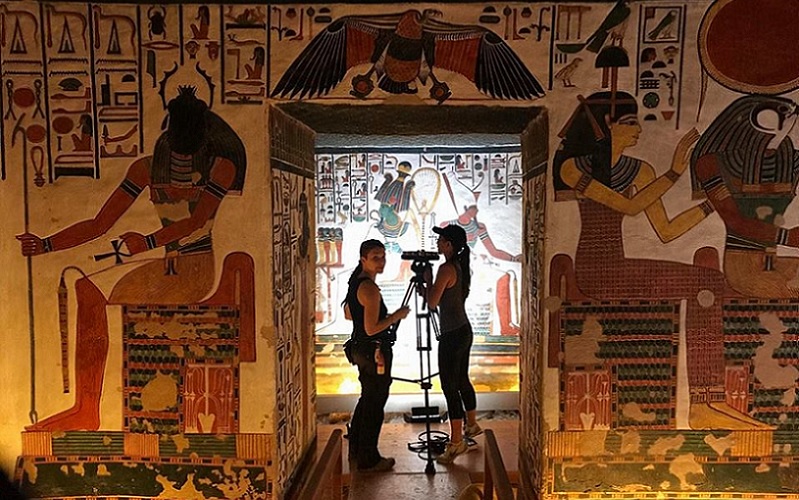 A virtually simulated tour of Nefertari's tomb has finally been released, giving people from all over the world a chance to step into this 3,000-year-old monument.

The virtual tour—Nefertari: Journey to Eternity—was put together by Experius VR and Curiosity Stream, providing an awesomely realistic replica of Nefertari's tomb. The simulation displays thousands of real-time images of the tomb, transferring you into the midst of all the vivid paintings and murals drawn onto the walls.

The viewers can learn about Nefertari's life and death throughout the tour by operating an optional tour guide's voice. By virtually touching the subject of interest, viewers can get more information about what they've 'touched.'

According to LiveScience, Experius VR spent two days in the tomb, 3D-scanning and taking over thousands of high-resolution photos. Experius VR claims that the tour is extremely accurate, due to the millimetre accuracy used whilst recording the images.

The tomb, built by the very-much-in-love husband Ramesses II, is located in the Valley of the Queens, Luxor. While the actual tomb is closed to the public, Zahi Hawass—archaeologist and former Minister of Sate for Antiquities—said that small groups could enter at price of EGP 1,000.

The VR tour, however, is readily available online for free on Steam, Viveport, and Curiosity Stream VR. The teams are hoping to work on ways to make Nefertari's Journey to Eternity accessible on all VR sets in the future.