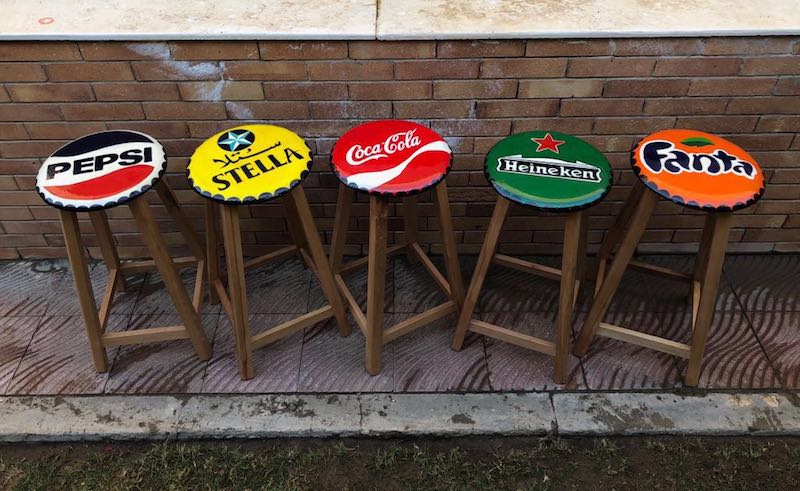 Ever looked at your chair and thought, gosh you're plain? No? Well it seems, Nute founders, Samar Aboul Yazid and Self Abdel Latif, have felt that way about stools for quite a while and decided to give them a little character. The two lifelong friends decided to collaborate in more than one way and brought us Nute, a customised stool brand that is the product of what happens when an entrepreneurial mind meets an artistic soul.

Nute, which launched on Instagram in February 2018, was an instant success within the first month and the duo sold up to 40 customised stools in no time. The creation of the brand came about as a collaboration between both of the founders' individual projects.

As a business student, Seif already had his own project called The Seat - focused on manufacturing chairs - when this stool business came along. Likewise, marketing student Samar was doing her own thing, selling her paintings online. Never having taken a serious interest in art, Samar woke up one morning and decided she wanted to paint. And that’s how her initial project, Brunette Curls came to life. Nute, though, was a different story.

“Seif called me one day and was excited about a new idea he had. Saying that, since he already knew so much about chairs and I know a lot about art, we should start putting my art on chairs, more specifically stools,” says Samar of the inspiration behind Nute. “And I was on-board right away. We knew could turn it into something really cool. And we agreed on custom-making them and everything.”

The next day, they both went out and bought four stools to start their project.

“We initially didn’t know anything about painting stools. But we tried and made a few errors along the way. And that’s how we learnt. When we first started, we kept sitting on the stools after painting them, because we still didn’t know how long it took for them to dry! And we kept getting paint all over ourselves.” Our favorite thing about Nute, though (other than the adorable backstory), is that they custom make everything from the shape, to the dimensions, to the design of every stool. When asked about the inspiration behind the name, Self tells us it's a merge between New and Mute.

“Mute because stools are like a forgotten piece of furniture. They’re there but not given enough credit. They’re mute.” says Seif proudly of the brand’s name.

"We're trying to go with several themes so right now we’re on the vintage theme. And so our stools may have a yellow tint or a chip on the side to emphasize the vintage aspect of it,” says Samar of the designs. “And our best sellers are the Stella stools, which are painted 3-D to look like a Stella bottle cap”.

This is just the beginning for the duo, though - Nute also just started receiving orders from corporates and they plan to eventually expand into clothing and, more peculiarly, music, which they were coy on revealing completely.

Intrigued? Stay tuned to the Nute Instagram page for more.