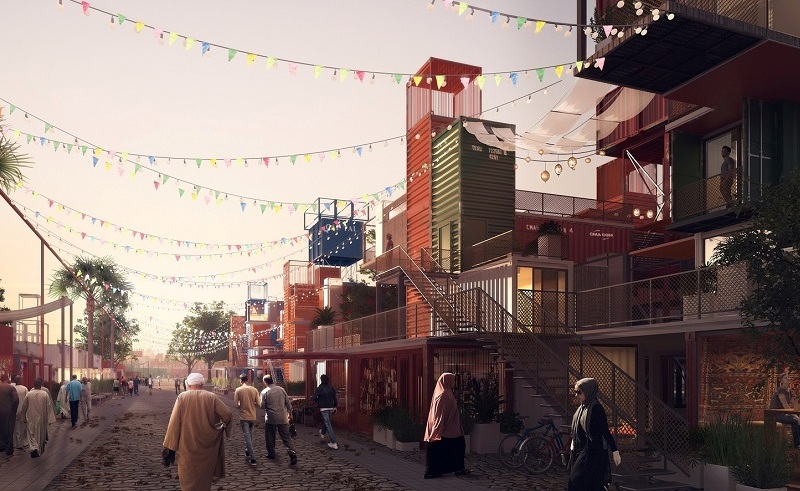 Egypt housing problem has, for decades, been a source of nuisance for consecutive governments and average Egyptians alike. It's an issue that's rarely addressed because, well, where do we start? Three Egyptian architects decided to start with a vision for a different, affordable, and prettier Cairo. Mouaz Abouzaid, Bassel Omara and Ahmed Hammad have designed a shipping container housing project to cater to Cairo's booming low-income housing needs, the main reason behind the city's notorious slums. Dubbed Sheltainer, the project aims to address the need for student, refugee and low-income housing in general, however keeping the focus on Egyptian life with designs for single housing units featuring all the necessary needs for a small family. The design, which is set in the Souq Al Goma' neighborhood, uses standard 20ft containers, with individual units combined into a cluster of eight homes surrounding a green courtyard, while incorporating bigger 40ft containers for bigger families. The flexibility of such housing units, as well as their convenience, are the main selling points of the project, which could further serve as a much-needed solution to the Syrian refugee crisis - which was initially the architect's main goal. “Home is not a place, it’s a feeling. People are connected to their homeland. Growing up in an environment with family and friends fuels people’s souls with a promising future. But being forced out [of homes] due to starvation, the economy, or even politics creates insecurity," the architects said to Arch Daily. "Twenty people are newly displaced every minute, and that becomes a challenge to provide a stable community that can cope with these rapid changes.”