Previous Post
9 Beautiful Must-See Churches Across Cairo
Next Post
History Lesson: How "The Wickedest Man In The World" Changed It Forever

Tini And The Gang Hit Up Nacelle's House Sessions

In what is possibly the best booking of 2016 to date, tINI, Bill Patrick, and Varit are ganging up on us party-going Cairenes this weekend! 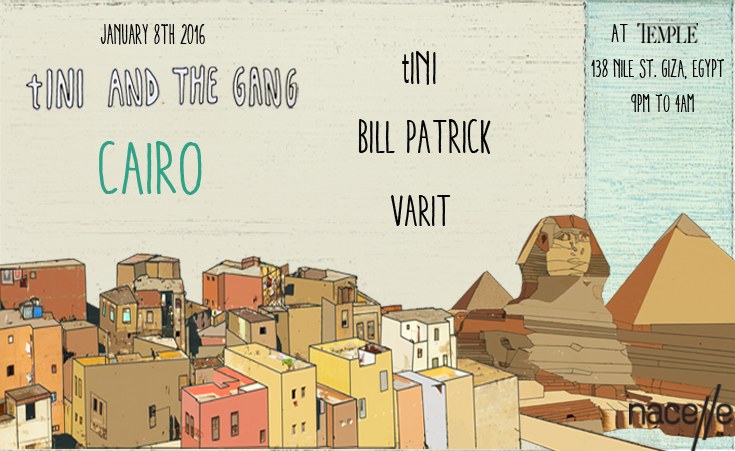 Alright so, we could go on forever about how much we love Nacelle, and how much fun we have there. The place is practically our second home; with their multitude of events we usually end up spending more time with the Nacelle crew than we spend with our own family, but this is not what concerns us (forgive us mom). This weekend we have a much bigger problem on our hands, well, it's not much bigger - maybe a tINI bit bigger.

tINI And The Gang - pronounced 'tee-nee' in case you were wondering - are hitting up Nacelle's House Sessions this Friday night, with a line-up that made us quiver when we first got word of it. As if tINI herself isn't enough, the munchkin from München is bringing along the whole gang, namely Bill Patrick, and VariT!

Bill Patrick is described on Resident Advisor as a demi-god, a fitting description if we do say so ourselves; his sets are masterful pieces of prime musical sorcery and he never fails to leave an imprint on the crowd. Co-founder of famed NYC Robots party nights, the man has been making the rounds for years, playing at festivals and clubs all over the world, and this weekend is Cairo's turn! Akheeran.

VariT is the now 27-year-old teenage prodigy from Madrid. At 16-years-old he was already opening for artists like Miss Kittin, Petre Insperiscu, Johnny D, and many more. VariT is a prolific DJ playing a mix of Dub Techno, Minimal, and Deep House. His self hosted nights in Shoreditch, London, aptly named VariT and Friends have been an integral part of London's underground scene.

If you are not familiar, tINI is a German goddess of divine musical powers. Don't let her minuscule physique fool you, this lady is a beast behind the decks and in the studio, with a multitude of successful serial events namely tINI and The Gang in Ibiza and Berlin, plus her continuous touring of every city that deserves her Desolat sounds. You can be sure that she will lead the night to a soaring peak of stellar proportions.

Y'all now the drill, but be warned, this is not your regular House Sessions; this is not the Deep House you're used to. This is not melodic, no flamboyant fills or flagrant drops here, this is Minimal House, this is Micro House, this avant-garde, slow moving, short drop, bite-sized Techno. It is not for everyone guys. Sorry, not sorry!