FancyPants @ Cairo Jazz Club: I Can't Dance But I Can Eat

Next time you’re at CJC to dance the night away, get there early and eat yourself silly. 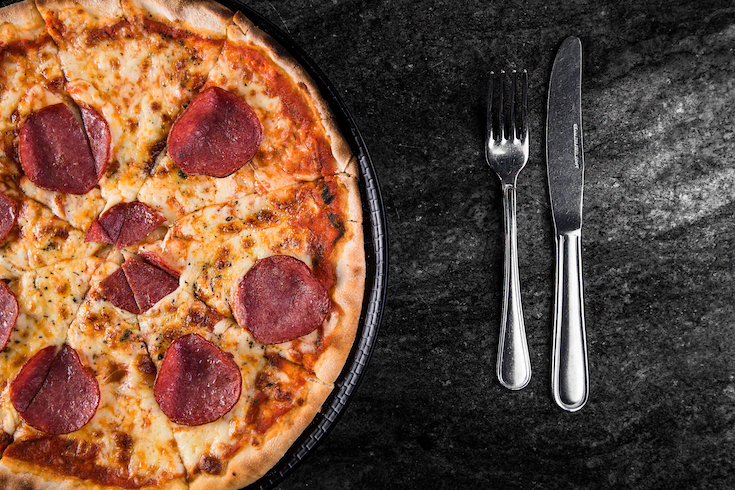 I’m going to be honest, I had no idea that Cairo Jazz Club even served food. Frosty bottles and shots of liquid soul sustenance, sometimes even served in test tubes, plus the biggest musical happenings in the city are the main attractions that draw me to CJC on the rare occasions when I’m feeling motivated enough to leave my house.
Beverages and beats aside, I never pictured it as the kind of place to sit down and eat a meal in the midst of all those shaking booties and subsonic frequencies. After getting a FancyPants exclusive peek at their new menu, they’re going to have to dedicate a booth to my exponentially expanding behind every night.
Making up the lightest options on the new menu you’ve got what the CJC crew affectionately refer to as ‘Bar Nibbles’. Light snacky types that serve as a great mattress to soak up all the liquid poison you may intentionally be pouring down your gullet. Marinated and roasted kalamata olives and cherry tomatoes – or go the pickled route with cucumbers, shallots, and olives – but the real star of this show is the pizza crackers. Triangular flatbreads lightly seasoned and served with a dip that boldly straddles the line between a traditional marinara sauce and salsa – it’s a lot like pizza but without the guilt and sleepiness that traditionally accompanies it, which is the difference between being a party pooper and a party legend at a place like CJC. Or, since they have actual pizza now, too, you can eat an entire pie on the dance floor and go down in history as a god among mortals. Those looking to do more than sit and snack at the bar can grab a table and start off with one of their salad options. A sweet corn salad with apple cider vinegar, mustard seed, and honey dressing – which is like a tangy texture party in your mouth, or a rocket and pomegranate salad with big chunks of feta cheese that create an original, smooth and sweet combination. Now that the salads were out of the way, as delicious as they were, I could now move on and sample CJC’s more comforting dishes with a reserve of dietary karma in the bank. First up in the finger food category were some cheese balls with a sweet chili dip. As opposed to the more traditional stick, the balls are a more compact cheese vehicle which totally eliminates the temptation of double dipping in a social situation – plus, cheese balls is much more fun to say. After that came the  Cairo Jazz Club’s version of my favourite food ever. No pressure.
I really like chicken wings – like a lot – so when I was informed that part of the new menu included them, I put on my judging face and prepared to be very, very mean. Just at the sight and smell of the deep fried severed chicken arms, slathered in a house-made buffalo sauce, the whole FancyPants facade melted away. Crunchy on the outside while still tender and juicy on the inside with the drumstick and wing still connected (a vastly superior style compared to them being separated for you before hand – I’m not a baby, I can take apart my own food, thank you very much). Clearly, Chef Abdu knows what's up. If you can’t stand anything spicy because your mouth is weak (though I wouldn’t consider CJC’s buffalo wings spicy at all, but I’ve probably killed most of the cells in my mouth capable of that kind of sensation a long time ago, so don’t take my word for it), they also offer wings coated in lemon honey mustard sauce that are just as delicious without the kick. If things had ended on that note, I would have considered my jazzy FancyPants excursion a resounding success. But then they brought out the burger. Medium rare, covered in cheese, and lovingly placed between two freshly baked buns, the Jazzy Cheese Burger was a work of freaking art – until I ripped it apart, that is. If you're into burgers, even just a little bit, the CJC burger is a must. If you’re not into burgers or maybe are sociable with someone who’s not a fan of delicious cow meat, CJC also offers a kickass lemon butter chicken that comes out with potato wedges that not only serve as a totally viable alternative but stands on its own as an excellent main dish. After I was resuscitated from my second food coma that evening, I was offered dessert. I promptly said “no, I’m going to die” and then ate it anyway. How could I say no to a chocolate mousse and homemade ice cream? The mousse had just a hint of orange zest to compliment the rich chocolate, which would probably be labelled as a controlled substance in many countries. Meanwhile the ice cream (added to the menu as an afterthought) totally stole the show. One scoop each of mango, date, and coconut flavour equaled literally one of the best ice cream experiences of my life, and I come from a place that takes great pride in its dairy products.