A product of the American public school system, Skot Thayer couldn't find Lebanon on a map. After his latest excursion to Lebanese foodie wonderland Enab Beirut, he's definitely going to look it up. 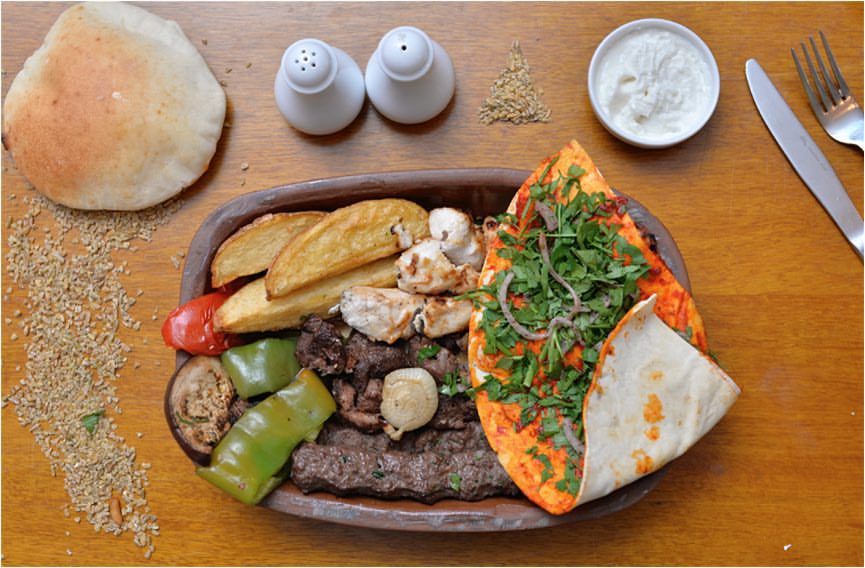 Walking into the Tivoli Dome food court, your brain begins to buzz with over stimulation. Bright lights, cacophonous water features, kids jumping on trampolines, screaming. But upon entering Enab Beirut, all that seems to dissolve at the doorway. The soft colour scheme and 60s-esque, Parisian/Moorish decor motifs are refreshing to somebody who’s forgotten what colours look like amid the ubiquitous dusty brown of the city. I also found the little framed felt 'paintings' to be totally adorbs.
The staff is great. Like, really awesome. As they lead my partner and I upstairs to our table, they took care to point out little details; a mass of Parisian lampshades hanging above, beautiful Spanish tiles under our feet - things I never would have appreciated nor probably even noticed to begin with, without our smiling guide to point them out. Since I don’t have a damn clue about Lebanese food, having someone there that was knowledgeable and eager enough to make recommendations was crucial - else I might have ended up accidentally ordering a bunch of weird (to me) meat snacks that would have gone to waste. They were incredibly patient with the endless iterations of ‘what’s that?’ every time they set a plate on the table.
My recent infatuation with Spanish tapas has developed into a full on obsession with mezzes thanks to Enab Beirut. After a cardamon and nutmeg spiced latte we were swarmed by so many tiny plates that it could have been mistaken for a micro UFO invasion. Stuffed grape leaves, little cooked kibbehs, kibbeh niyeh, hummus, sogo2, batata harra, on and on until the rather ample table was so full of mezzehs that there was no room for my caveman-mannered elbows on the table.
I think, prior to my move to Egypt, the only ‘Middle Eastern’ food I was any kind of familiar with was hummus. I used to buy the family-value sized tubs of the stuff from the grocery store and tear through it in a disgustingly short amount of time. I don’t know what kind of vitamins or minerals or whatever chickpeas are supposed to have but I think it’s safe to say that my blood could be used to give people suffering from a deficiency of them such a huge boost. All that to justify that when I say this was probably the best hummus I’ve ever had, you should believe me. Granted my experience is limited to the stuff from the grocery store and the really sandy ‘hummus' that my old roommate used to make with his hand-me-down blender from the 80s. Maybe you won’t believe me. I will fight you over Enab Beirut’s hummus served with fresh warm bread though. But it was so very pretty
I’m not really a big meat eater but the carnivore I brought with me assures me the raw meat bucket, or kibbeh niyeh, was on point. They also had this mashed potato stuff with green onions in it that rocked my socks. After spending quite some time stuffing my face full of vine leaves and these little Lebanese-style cheese sticks, which really satisfied my American need to devour fried dairy, they brought out a selection of choices from their grill. Kofta, and shish tawook with flatbread that was smeared with tomato sauce and onions on top. I wrapped the shish tawook in the bread and let it all melt in my mouth while I awkwardly made moaning yummy sounds aloud. Honestly, I can’t remember everything I ate (at this point it’s been less than 24 hours since the meal) since they gave us pretty much everything on the menu. Like they were trying to impress us or something (they did). Thankfully they packed up our leftovers and bagged it up for us to take home. I’m going to be eating Lebanese food for a week.
Then they insisted we try dessert: konafa with cream, and aish el saraya with rose water. They also forced fresh juice on us, the bastards. Lemon and mint with crushed ice as well as fresh squeezed apple juice (which reminded me of cider back home in NY), the monsters. They even set me up with a shisha, one of my favourite past times in Egypt, which had an orange set up over the bowl. I’m not sure what this did. The tobacco still tasted like grape-mint but it sure looked cool.
My brief experience with Lebanese food in the past never had me considering it as an option for meal time before but my trip to Enab Beirut and the lovely staff and food has cemented the stuff in my mind as an enduring favourite.