Inside Keji, The Nikkei Empire Bringing The World’s Hottest Ethnic Fusion To the Nile

Peruvian-Japanese Nikkei cuisine landed in Cairo, as fusion hotspot Keji just launched on the banks of the Nile. We got an exclusive insight into its ceviche delish and fusion drinks, and this is what happened. 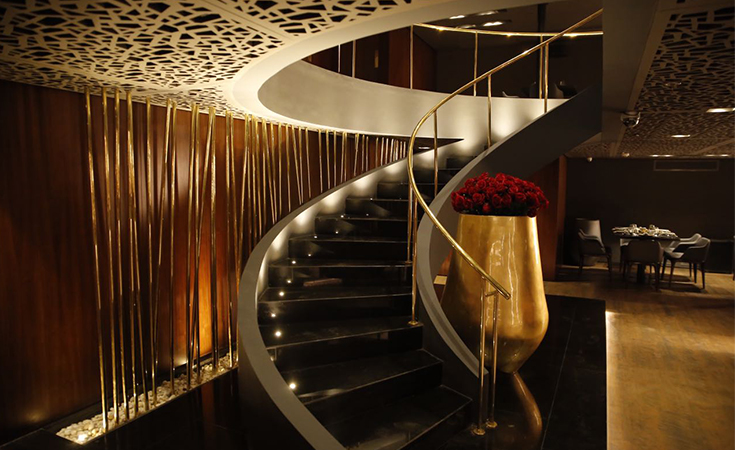 Stepping into Keji is sliding right into another land. A land where the mysticism of Peruvian spices fuses with Japanese seaside delights. A land where colorful chili peppers and bright green limes meet the ancient techniques crafting miracles with rice. A land that, by pure fate and cultural encounters, breeds and breathes the scents of a culinary craft: Nikkei cuisine.

Five hundred years ago, the Japanese reached the land of fish and colorful spices. It was the beginning of their first diaspora, a journey that would see thousands of Nippon people voyageing across the Pacific to find gold and safer realities on Latin American soil. Peruvians’ crafty techniques to cook fish then mixed with sushi and sashimi-style dishes, crafting the aromatic flavors known as Nikkei cuisine. “Nikkei is actually a word that comes from diaspora,” explains Abdul Baaghil, co-founder of Harvest Cotton Tale and consultant in this ethnic wonderland that is Keji.

“But Nikkei is more than the cuisine; it’s a universal experience where music blends Peruvian sounds with upbeat rhythms. Keji has a strong, outgoing personality; a Nikkei culinary approach, and cocktails that mix and match Peruvian spices to complement the food. It’s an experience where each detail complements the other one,” he says.

As we get an exclusive peek into the restaurant, whose decoration emulates the fusion of two iconic ethnic identities, we are lured in by the taste of Passion for Nile, a spicy cocktail whose sweet aroma and a spicy zest that tickles our senses. “Peruvian-Japanese food, and the mix of two ethnic foods, is becoming a culture and a very appealing experience, with restaurants popping up in London, Paris, and New York,” adds Baaghil’s partner, Bruno Contreras. As we speak, cocktail blenders clatter in the background, as Greek mixologist Spyros Kerkyras prepares the next round. Hailing from Athens, Kerkyras has just landed in Cairo to join the Nile bound hotspot, an incursion his own catering company Bar Solutions is excited to take on.

“After working 14 years as a mixologist, I decided to delve into Nikkei cuisine, by creating new flavours that combine the techniques used by chefs to pair drinks with the dishes they serve,” he explains. “In this mix of Peruvian and Japanese culture, we are using peppers, citrus such as lemons and limes, chili peppers and exotic fruits. The flavours are very herbal, spicy and sour sweet. You can feel the chilly and the ginger as soon as you take the first sip.” The result is tantalizing. His Peruvian milk Punch, a delicious mixture evoking whiffs of chocolate and coconut milk, seeps an otherworldly feel into the tongue. What’s the dish to accompany it? It’s not too long after we ask that a relic of a sushi plate is set on the table. Holding the tray, Carlos Fat Wong’s name gives away his heritage.

The Peruvian chef, who arrived in Egypt only two weeks ago to serve as the restaurant’s Executive chef, embodies the tale of his ancestors, which once experimented with flavours as his lives were overturned. “I was in Japan for five years and, as I love Peruvian cuisine, I learned how to mix them,” he says, introducing his trademark dishes. “Some of our best dishes include Tiraditos, made of tuna, and maki acevichados, Peruvian style California roll. But the powerhouse’s feature dish is the Peruvian Ceviche – a seafood dish typically made from fresh raw fish cured in citrus juices –infused with spicy flavours such as Aji Amarillo and Japanese Humdashi. Working alongside is his counterpart and conational chef Hanz Flores Acosta, a sushi expert especially dedicated to creating Nikkei sushi. “Nikkei sushi is a clash between Peruvian ingredients and flavours with Japanese techniques; instead of rice and salmon, it has a much stronger flavor and aroma,” he says. “We make sushi, sashimi and temaki, but we mix it with red onions, aji Amarillo, aji Panca and cooked dressings that are staple in Peruvian cuisine,” explains this emblematic cook, whose arms are tattooed with the motto that crystallizes the proficiency and dedication he pours in his heart and soul. “I sold my soul to the devil, in exchange for the best recipes,” it reads.