First it was mangoes, then it was red velvet, then “golden berry,” what next? Molokheyya? 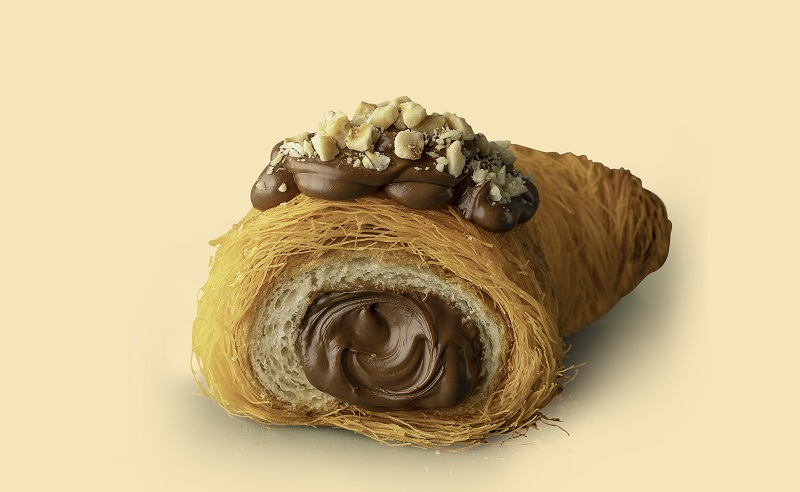 Ah yes, Ramadan; a time when families come together over the dinner table (or anywhere else really), a time when piety and patience are at an all-time high, and a time when sins seemingly slough off the soul as folks bring out their inner angel for charity and just good times. Coincidentally, it’s also a time when every bakery and pastry shop out there put on their creativity caps to try and butcher improve upon traditional Egyptian desserts to try and “reinvent the wheel,” so to speak.

So we’ve gone ahead and scrounged up some of the most innovative, the most left-field and flat out weird additions people have tried (and succeeded) to tack onto your grandmother’s Konafa. None of this Is sponsored, but boy we wouldn’t mind any of the stuff we have here.

Right, well this is a good jumping off point if any at all. La Poire's newest confectionery creation - the Lotus-Oreo-Konafa-Hybrid - is their newest invention for this year's sweet summer slam. We're not going to necessarily rip on this thing, but we're just going to question the kind of texture you'd expect from something this... diverse. Nonetheless, we would like to collectively live inside this thing, and hope that La Poire would be kind enough to help us in that endeavour.

Though not as outlandish as the Lotus-Oreo mutant, there's an odd charm when it comes to something as conflicting as salted caramel; you have salt - the opposite of sugar - and then you have extremely burnt sugar - the opposite of salt. Pair all that with a few layers of Konafa and what we can only assume is heavy cream, and you have yourself at least three dental bills to work off, apart from the kilograms. Arguably the most "decadent" item on this diabetes report of an article, Tortina's Konafa Mont Blanc adds an elegant and eloquent spin on an ancient dessert staple. A creamy chestnut puree, gingerly topped with a prime layer of baked konafa, and decorated with happy pile of meringue biscuits. Though we just made that sound purely like an ad, we feel it more like singing a song than listing its ingredients when we say it that way. So yeah, Tortina, you're welcome. Not too far down from the mischievous Mont Blanc, Tortina's Banana Dates Pudding strays somewhat farther away from tradition, preferring instead to hang out with a rich group of flavours. An apt layer of Konafa forms the foundation for some chopped bananas and dates, a healthy helping of toffee sauce, vanilla pudding, and a funky "hat" of cinnamon-scented cream. Again, the textures might just crumble and it'll probably turn into a fistfight of flavour, but we need it in our lives anyway. Now this just isn't fair for folks eating it; it has Sugar Rush's smooth soft-serve ice cream, but mixed in and surrounded with konafa and bits of hazelnut, then slathered in a bunch of chocolate. Between trying to avoid a brain freeze and having to reprogram your tongue to figure out the kind of texture that pairing forms, there's a lot of overwhelming aspects to tend to. They also offer vanilla soft-serve covered in konafa or basbousa, both with a healthy helping of honey. Stop while you're ahead. Coppermelt's culinary creators seem to have taken the dopamine aspect of chocolate a bit too seriously, and quite literally buried a transcontinental dessert icon in modern consumer-brand candy. Again, we might sound too uppity (and the writer is definitely a grumpy old man), but there's nothing we'd rather do with anybody that can rival diving head first into this thing. Though we try to criticise whenever applicable, the choice of basbousa to hold all that richness in place is supreme. Now this is just an adorable little homage to one of history's most endearing cultural design choices, one that works great with the spirit of Ramadan. This simplistic chocolate "mosque" hiding a pleasant pile of nutritious dates is eye-catching enough that it could perhaps camouflage its dainty flaws. The writer hates dates, but wouldn't mind giving them a go if it comes packaged like this. Aesthetic plays a massive role in anything's overall appeal. Alright, it's green. Though it isn't the most appetising colour to put on food (salads suck), the way this thing is arranged and presented already makes it belong in our mouths. Basbousa's aromatic Lebanese cousin, mafrouka, forms the base of this little minimalist work of art, complete with dense layers of cream, and infused with rosewater, light spices and pistachios makes it just... work. It works, go get it, deliver it to us then get yourself a salad.

This thing quite literally took us aback. TBS's newest technological marvel has a straight-up croissant filled with your choice of Nutella and nuts, Lotus and dates, Halawa and sesame, or just pistachios and creme, all hidden in a protective konafa layer, and topped with some of its filling. Ladies and gentlemen, please welcome the Cronafa. Something so revolutionary that the folks over at TBS want to enter it into the dictionary. They have MO4's vote indeed (bribe us). Humans tend to have difficulties when it comes to telling apart what they could and what they should do. But for as long as we can remember, Sultana has always been finding interesting ways to pair ice cream with anything, and this chilled pairing of old and new is definitely worth a look. A layer of rich, chewy basbousa meets a heap of lotus-flavoured sultana ice cream (an acquired taste sometimes) and topped with cream and even more lotus bicuits. Regardless of past history with Sultana, we want to take a stab at this thing. Nola's foray into the konafa dreamscape is another example of French elegance nestled in a traditional Egyptian middle-eastern treats. A whole pile of creamy custard occupies the centre of a crispy castle of Konafa, complete with an aesthetic, caramelised top layer forms something that plays on the fine line between risk and reward. Good job, Nola, Good job. Strategically placed last for a reason, but here nonetheless for its attractive layout, Salé Sucré's Tres Leches Cake waltzes into the "Ramadanarena" with a swagger unlike the rest of the entries here. Tres Leches is a Central and South American dessert delicacy; basically a sponge cake soaked in condensed milk, evaporated milk and heavy cream, and then topped with a layer of toasted meringue. It doesn't belong in the Ramadan scene, but it's rich in both flavour and culture. Lay it on us please.

We are in no way responsible for your weight problems, diabetes concerns or root canal, so don't pin any of this on us. We hope we gave your eyes and taste buds a raucous ride of rich proportions, and maybe any of these kind establishments can holler at us with a few samples of their work. We're underfed and dying.