Slip into one of The Kashma's glamorous swim coverups and no one will be able to tell your voluptuous curves from your jelly rolls. 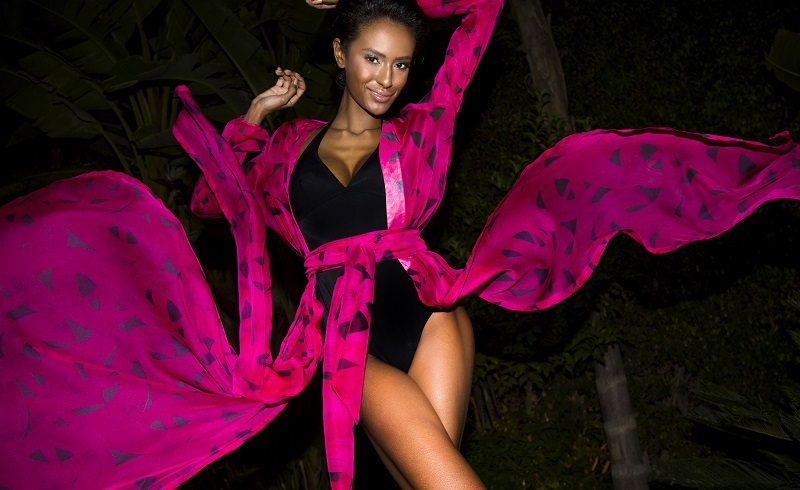 People’s ultimate summer fantasy is lying under the sun, their lean bodies glistening with tanning oil while fake reading a book in the hopes that someone charming will approach them and strike a scintillating conversation. There are no instances of that ever happening in recorded human history, except maybe to Sandra Bullock in The Net – although, technically, that’s fiction, and he turned out to be the bad guy who eventually embroils her in a cyber conspiracy. When we think beach, we think sand up our butt cracks, sucking in our tummies, sunburns, sharks, and just overall unpleasantness. For those reasons, we have long confined our summer reveries and jiggly thighs to our bathrooms. They say less is more, and yet less fabric doesn’t seem to be working for us! Menna Sherbini – who also happens to be MO4 Network’s Business Development Director (we were not coerced into writing this article at all *blinks twice*) – is tackling summer’s fabric deficiency with dreamy patterns and colourful, exotic designs. Her newly launched summer wear brand The Kashma is the sartorial representation of all things summer. Kicking off with a line of sick swim coverups, The Kashma is unfurling the fullest extent of the brand’s glamour. “I love summer, I hate winter. It’s all about the material that I use, like chiffon and silk and such. It’s flowy, soft, and colourful,” Sherbini explains. Sherbini has an entire summer wear empire under wraps, with plans to expand her fashion line to include skirts, dresses, pants, and so much more. “There are other types of swim covers that I’ll be releasing soon, ones you can just slip on while hanging out by the beach,” Sherbini says. “These wraps, are more glamorous, they cover you properly, so you can wear them if you’re driving from one beach to another.” Point is you can be Sandra Bullock in The Net sans the bad guy, the cyber conspiracy, and the smoking hot body, just slip one of Sherbini’s creations on (oh, and did we mention they’re see-through? Ooh La La!) and no one will be able to tell your jelly rolls from your voluptuous curves. It’s better than Photoshop! Sure, the fish will be horrified, but on land, with the humans (your target demographic), you’re Beyoncé!