'Please don't get a divorce Captain America and Iron Man, we're sorry for whatever we did – hey, look, it's Spiderman!' 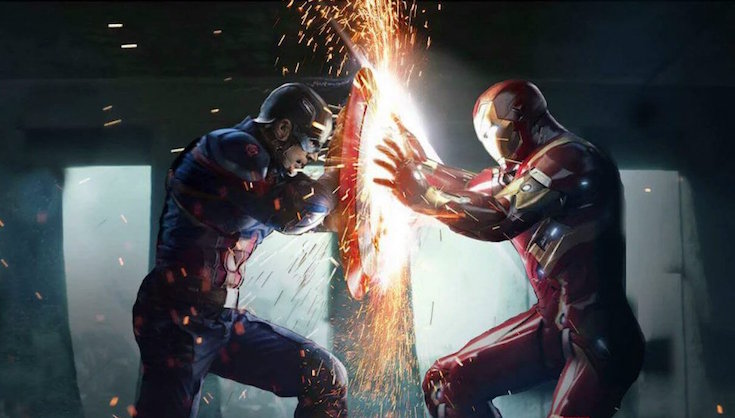 Civil War is the movie we’ve all been waiting for since The Avengers first assembled way back in 2012, simultaneously balancing Captain America and Iron Man’s evolving relationship, integrating relative newcomers like Ant-Man and Falcon into the Avengers dynamic, and introducing brand new characters. Featuring what could possibly be the most astonishing action sequence ever, the 13th movie in the unstoppable Marvel movie money train juxtaposes super-heroics with political thriller-type suspense for maximum effect. By the time it's over, you’ll probably have laughed, cried, and screamed “SPIDERMAN” more than a couple of times.
Of course, it’s going to be impossible to ignore the similarities between Captain America: Civil War and another recently released comic book movie about guys in costumes who have beef with each other. Both movies, at their hearts, deal with the collateral damage caused by ‘enhanced’ individuals and how those individuals disagree about accountability and oversight. Without doing a side-by-side comparison, it suffices to say that many of the issues DC’s Batman v. Superman stumbled over are some of the strongest points of Civil War. Tony Stark and Steve Roger’s viewpoints are easy to understand and identify with, and throughout the flick it’s possible to find yourself switching sides as the argument builds to climax. Likewise, the behind-the-scenes manipulation of the heroes provides an emotional tether for the audience and leads to a climactic reveal on par with the one in The Winter Soldier. Speaking of Cap’s pal, Bucky, he is featured prominently throughout, and the opening scene reminds us just how dangerous he is when Hydra has their claws in him. Following the events of pretty much all the other Marvel movies, the casualties of The Avengers’ antics reach a critical mass when they botch an attempt to stop a terrorist attack and kill several Wakandan aid workers. The leaders of the world, including King T’Chaka of Wakanda, then prepare to ratify the Sokovia Accords, which would create a UN council to which The Avengers would be held accountable to. Captain Steve Rogers takes the classic stance of American exceptionalism, claiming that “the safest hands are still our own,” even though it threatens the sovereignty of the other countries of the world. Tony Stark, on the other side, says that they need to be held accountable even if it means being subject to political agendas. A bombing just before the signing of the accords kills the Wakandan king, who also happens to be the father of T’Challa, The Black Panther. Once it’s revealed that Bucky “The Winter Soldier” Barnes is allegedly responsible, he swears revenge and dons his super cool catsuit to hunt Bucky down. The first few scenes drag, just ever so slightly, but as soon as Cap and his old pal are reunited, stuff gets totally nuts. One by one the heroes, both new and old, take sides, each with their own perspective and convictions dictating their choice. The Black Panther is an exciting addition to the universe, providing an independent perspective. Chadwick Boseman does a great job portraying the grief-stricken but duty bound T’Challa, though his fake accent was kind of laughable at times. His cool black suit and distinct fighting style make him an instant fan favourite. Paul Bettany’s Vision is still struggling to fit in among the others and his budding feelings for Wanda, The Scarlet Witch, are as adorable as his sweater. This relationship adds another dimension to the conflict and provides a measure of depth to both characters. Paul Rudd returns as Ant-Man on Team Cap and has some great moments, especially in the big fight at the airport. His awkward geeking out at the sight of Captain America is endearing, but Rudd’s performance seems just a tad too wooden compared to some of the others. I’m not saying I need all that much in the way of range from an actor playing Ant-Man, but he does a fine enough job as comic relief. Oh, and speaking of insect-themed superheroes, Spiderman’s in this movie, too. From the second the Tom Holland comes on screen, it’s obvious why he got the part. His awkward charm has the audience eating out of his hand as he and Stark trade snarky comments. Even during the fight scenes, this Spiderman’s fighting style, fuelled by constant comments and jokes, seems like the version of the wall-crawler that was always meant to be. His presence during the big showdown, and the other characters’ reactions to him, imbues the whole scene with an irreverent energy that complements the spectacle of it all spectacularly. Even without the most popular Marvel character ever making an appearance, Civil War is one of the best genre flicks yet. Spidey’s addition just makes it that much better.
By the time the big showdown is over, there’s still quite of bit of movie left and the real villain gets to shine. Zemo, played by the always kind of unsettling Daniel Bruhl, starts the movie as someone whose intentions are totally hidden to the audience and are not revealed until the very last moment. His masterful manipulation of the Avengers is supervillainy at its finest. His big reveal had us in the theatre muttering ‘oh damn…’ and provides a terrific arc for the film’s story. His continued existence and confidence is something that was sorely missing in the cinematic universe where too many of the villains seem to be throwaway foils for whatever guy is featured in the title.
Epic doesn’t begin to describe Civil War, nor does it do justice to Marvel’s consistent and expanding universe. Now that we’ve seen a dozen heroes all share the same screen in what has amounted to one of the best comic book movies ever, it gives this particular geek hope for the future films after the letdown that was Age of Ultron. Black Panther is also an interesting hero of colour that has already amounted to more than the ‘black sidekick to a white guy’ trope that War Machine and Falcon seem to be clinging to. To bring back the comparison to DC, Civil War is not without issues, but those issues are buried so far under sheer crazy awesomeness that you can be forgiven for never noticing them at all. Where in Dawn of Justice I never understood neither Batman’s or Superman’s intentions, and Luthor just kind of seemed like a dick, Civil War gives us all the depth a movie about superheroes can without having to beg its fans to suspend their disbelief even more than they already have to. All I wanted in BvS was for the two titans of DC’s universe to really beat the crap out of each other for spectacle’s sake; Civil War makes me feel like a kid caught in a messy divorce, just wanting everyone to get along again. But this time with more Spiderman.