Somebody who wanted to be nobody decides to actually be somebody and other confusing decisions before we get to the Battle of the B******. 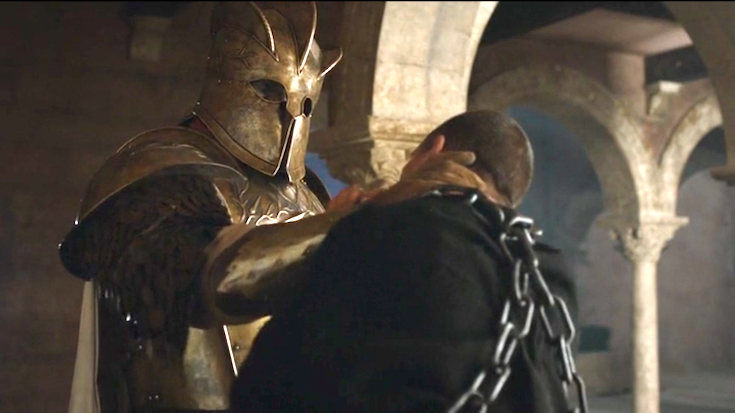 I have returned. However unlike The Hound it didn't take me two whole seasons. Thankfully there was another fantasy-politics aficionado around to make sure you guys still got your GoT recap fix. This week’s episode, No One, follows some of the most wildly shocking episodes we’ve had in the series so far. In true Thrones fashion, this episode manages to barely manages to keep us on edge even without huge reveals or major character deaths. Full of touching reunions, questionable character motives and a serious lack of Ian McShane this week solidifies the mid-season slump of season 6.
In Braavos, Lady Crane is giving another Oscar worthy performance as Cersei. Honestly, I'm kind of over this Shakespearean retelling of previous seasons - which I affectionately refer to as GoT With Farts - but it looks like we’re finally moving past it. Arya has managed to make her way backstage figuring that Lady Crane owes her one after Arya tipped her off to the attempts on her life. After Lady Crane patches up her multiple abdominal stab-wounds and takes care of her impending sepsis, Crane shares some stories of domestic violence and Arya mentions that she wants to see what lies west of Westoros. Crane, like the audience, must realise that doesn’t make much sense and sends Arya off to la-la land with some milk of the poppy (pronounced morphine here in the real world).
When Arya wakes up Crane has been brutally killed because duh. The Waif then proceeds to chase her through the streets as she continually jumps from really high places and opens up her wounds. Besides the school of face stealing ninjas, The Waif also apparently took some classes at horror monster movie academy. The way she menacingly stares at Arya and slowly wades through the streets like it’s Friday The 13th is laughable. The ‘chase’ ends when Arya reaches her hideout and grabs needle for a seeming last stand. The scene has no real tension but it was cool to watch Arya slice that candle. At the House of Black and White, Jaqen H’ghar spots a fresh face that’s been added to the collection, The Waif’s. Arya menaces him with needle and Jaqen magically decides that she’s finally no one and is ready to join the magic face ninja school. Arya totally rejects him though, telling him her name is Arya Stark and she’s going home. Not only does Arya totally reject everything she was working towards but also states two wholly different goals, going home to Winterfell and exploring beyond Westeros. Not only does that leave us confused about what she really plans to do but we’ve also been denied any kind of real payoff in this arc. I’m seriously hoping that the next Arya storyline makes up for this seeming waste of one of the show’s best characters.
As a group of guys we assume are from the Brotherhood Without Banners horse around and try to stick their finger’s up each other’s butts like fraternity guys, the Hound doesn’t so much as sneak as he does just walk right up and murder the crap out of them. Sandor’s understandably upset that the Lemoncloak guy and his buddies killed Ian McShane, denying us of his thespian talents in future episodes. Again, things get kind of confusing and weird once he actually happens upon the ones responsible. The man in yellow and his pals are about to be hanged by none other than Beric Dondarrion and Throros of Myr when Clegane the younger strolls up and awkwardly bargains for the rights to execute them. After settling on exactly how many he can kill and the method (still hanging) The Hound steals the not-quite-dead-yet guy’s boots and apparently joins the Brotherhood. If you were worried that everyone’s favourite horribly disfigured murderer with a heart of gold was headed towards renouncing violence after helping build a church, it would seem that those fears have been partially assuaged. After convincing the chief fanatics of the Red Faith to work as propaganda agents for Daenerys, Tyrion and co. are in high spirits. Varys is headed to Westeros to start looking for Targaryen allies before the Mother of Dragons shows up. After finally convincing Grey Worm and Missandei to loosen up, sip a little wine and tell some jokes, everything seems to be going great, until a huge fleet of hostile ships from the Masters of Slaver’s Bay show up to poop on their party. Everybody’s pretty pissed at Tyrion, understandably, since it was his attempt at diplomacy that landed them in this situation. As Grey Worm plans for the defense of Mereen’s great pyramid, Dany gets dropped off by Drogon and walks in with ‘WTF’ written all over her face.
The interactions between Tyrion, Missandei and Grey Worm culminated in a very cute moment there with them all telling jokes (the look Grey Worm gives Missandei: AWWW!). The episode also seriously teases us with the shot of Drogon flying towards the fireball hurling ships without the payoff of actually watching him burn them all to death. Hopefully next week we can get another pyromanic spectacle that will make the Battle of the Blackwater back in season two look like a book of matches.
We all knew that this battle was coming but we weren’t expecting to have to wait to see it payoff. Conversely the siege of Riverrun gets resolved, seemingly out of nowhere. Brienne and Pod come into the Lannister camp looking to free the Tully army, lead by Uncle Blackfish, and bring them North to assist Sansa and Jon. The reunion of Pod and Bron, as well as Brienne and Jaime, makes us nostalgic for seasons past. Jaime sends Brienne to enter the castle to attempt to convince the Blackfish to surrender. Brienne agrees as long as Jaime swears to led them head north unscathed. Jaime’s motives seem a little unclear at first - why make such a big deal about one house illegally reclaiming their home only to let them help another house do the same? He clears things up later while speaking to the captive Edmure, that he doesn’t care about any of this, as long as he can get back to Cersei. The scene between Jaime and Edmure is one of those moments we watch GoT for. A relatively quiet scene that allows the emotional depth of these characters to shine through without hitting you over the head with information. Jaime’s duality is also perfectly exemplified in these moments. When he tells Brienne that his valyrian sword will always be hers and respectfully allows her to go even after she admits that if she can’t convince the Blackfish to surrender, she’ll have to fight Jaime, we love him, then after he tells Edmure that he’ll fire his infant son from a catapult if that means he can go back to Cersei, we hate him again.
Blackfish is kind of betrayed by his men, who blindly follow orders from Edmure, their true lord, to lower the bridge and lay down their arms. Blackfish leads Brienne and Pod to escape but refuses to follow with, fighting and dying offscreen for his ancestral home.
And then there’s Cersei. In King’s Landing, a detachment of Faith Militant, lead by none other than cousin Lancel Lannister have come to take Cersei somewhere for some reason that doesn’t matter because The Undead Mountain is not having any of it. After delivering that sweet line from the pre-season teasers, “I choose violence,” one of the soldier-bums buries his spiked club in The Mountain’s chest, which does just about nothing, and The Mountain rips his head off for it. Then they head to the throne room for King Tommen’s announcement that he’s abolishing trial by combat throughout the realm. That dastardly High Sparrow has outwitted Cersei and is having both her and Loras tried the old fashion way, by seven, presumably biased, septons. Tommen clearly knows that he’s pissed his mom off but is too concerned with keeping everyone else happy to give a crap. I guess that means we won’t be seeing the showdown between The Mountain and whoever the Faith would have chosen (maybe his brother?). Then, Qyburn informs Cersei that he’s looked into a certain rumor and it’s “so much more”. The only thing I can think of that he could be talking about is the stockpiled dragon-napalm Tyrion had made back in season 2. So, I guess that means Cersei would rather burn everything down rather than be removed from power, just like the Mad King. With two episodes left, we’ve tied many of the plot lines, so that just leaves the battle for Winterfell and the defense of Mereen. That’s a lot of action. The biggest takeaway from this episode for me, the guy who read the books, is after much hinting in the show and behind the scenes, apparently we’re not going to get *MEGASPOILERALERT* Lady Stoneheart, the reanimated corpse of Catelyn Stark who wreaked wrathful vengeance on those that murdered her and her family. Since Beric is still in the mix and presumably Thoros can only resurrect one person at a time it looks like it’s a serious stretch to believe we’ll see her this season.