NASA Officially Announces They Found Water On Mars. Is Life Next?

After years of speculation, NASA has confirmed that there's water on the Red Planet. 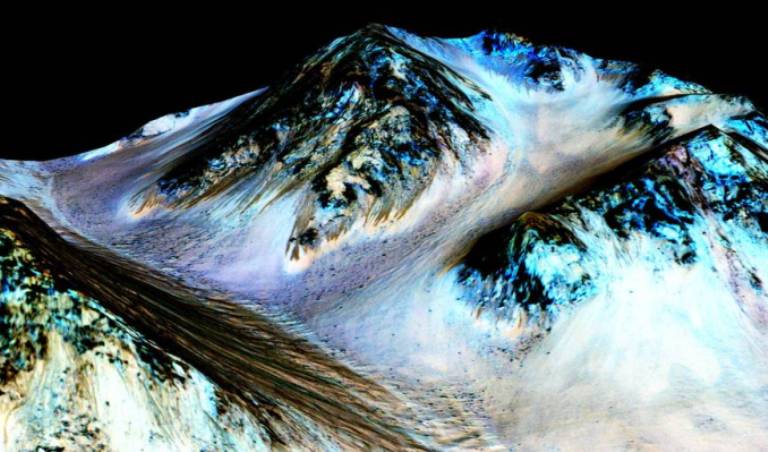 Over the weekend, there were a lot of rumours that NASA was preparing to make a historic announcement about a discovery made on Mars. Many believed the announcement would be about discovering life on Mars. Although they haven’t found an alien life form quite yet, NASA has officially announced that they have found water on Mars, which is considered the precursor for any life on the red planet.

Mysterious streaks have been seen appearing and disappearing down slopes on the Red Planet. The questions surrounding the unexplained phenomenon have finally been answered. Scientists now believe that the streaks which appear darker in warm seasons, and fade during cooler seasons is believed to be caused by water.

According to astronaut and associate administrator of NASA's Science Mission Directorate in Washington, John Grunsfeld "Our quest on Mars has been to 'follow the water,' in our search for life in the universe, and now we have convincing science that validates what we've long suspected. This is a significant development, as it appears to confirm that water -- albeit briny -- is flowing today on the surface of Mars."

Some had speculated that the streaks were water, but had little evidence to prove the theory. The latest discovery focuses on hydrated salts that were found on the slopes known as recurring slope lineae (RSL). The hydrated salts are believed to lower the freezing point of liquid brine and begin appearing when temperatures are above minus 10 degrees Fahrenheit.

According to lead author of the report, Georgia Tech’s Lujendra Ojha: "We found the hydrated salts only when the seasonal features were widest, which suggests that either the dark streaks themselves or a process that forms them is the source of the hydration. In either case, the detection of hydrated salts on these slopes means that water plays a vital role in the formation of these streaks.”

Finding water brings scientist one step closer to finding alien life on the planet, as water is believed to be the precursor of any life. Hopefully upon examining these water rich areas one hopes the Mars rovers roaming around may stumble on life before running over it.