#NextIsNow: A First Look at Samsung Galaxy Note 5 and S6+

We headed to the Cairo unveiling of the two new Samsung devices to see what those tech wizards have been working on. 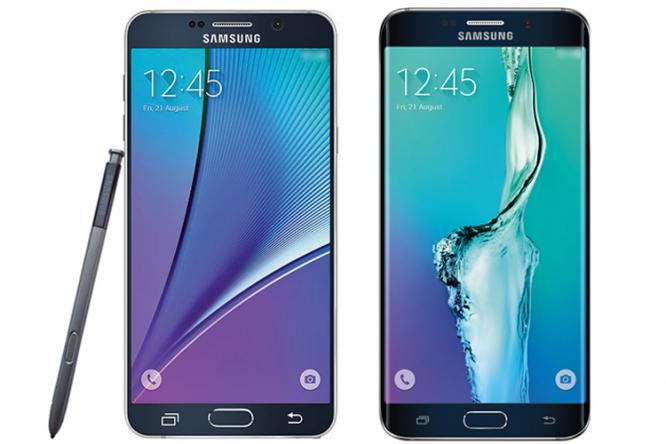 At Egypt's local version of Samsung's much anticipated unpacking event, where they proved the #NextIsNow, we got the first glimpse at their new devices; the Galaxy Note 5 and the Galaxy S6+. “Stay ahead of the curve,” says Samsung's President and CEO, JK Shin. That’s how they keep Samsung on top of the smartphones game. Straight away, the first thing we notice about the phone is that the screens are bigger but the phones are slimmer. Justin Denison, the vice president of Samsung, talks about what led to these beauties and the concept behind them: “We summoned the courage, we believe in the Note, we believe man needs a bigger phone,” talking about why there’s a Samsung Note and why it bashed the market ever since version one with its ‘unusually’ big screen which has now become the norm. People want a big display but they don’t want a bulky phone – a bigger display will allow you to do more. There are a couple of compromises though, like it might not fit your pocket but Denison had the perfect comeback for it: “We made a big display but a slimmer metal and glass form. It’s thinner, smaller and lighter than before.” They incorporated a curved back so it helps you multitask and love your phone even more – and maybe watch your favourite videos there. “We added the feature that you write with the pen right off the screen. You don't have to unlock,” he describes about the Note 5. Also now, a feature called Air Command which means you can write a command on the screen of anything you want to do on the phone and it’ll do it right away. HOW FANCY IS THAT?

Now, here’s the true killer. The Note 5 let's you type on classic QWERTY keyboards with the whole alphabet there at your dispsal. Thunderbolt speed e-mails is what this is all about, no? (And probably spamming everyone on Whatsapp groups.)

Alanna Cotton, Samsung's vice president of mobiles, continues the technology and talks about S6 Edge+ - with the dual edge design. “The curve display resonates with our consumers. Can we include a larger display? Of course we can!” she says excitedly. The S6+ is even smoother and detailed for a general experience. “The screen is bigger but the phone is actually smaller.” They also installed a very immersive display that adds to your movie/game experience with Bluetooth headphones that let you really get into it.

For the first time the Note and the Galaxy S both share the same size screen, a 5.7 inch Super AMOLED Quad HD display. They both also share the same specs when it comes to speed: 4GB of LPDDR4 RAM which is quite enormous for multitasking . “These devices are crazy fast,” says Denison as he also confirms that as they age, they’ll still hold their glamour and performance.

More new additions which they both share are fingerprint scanning as well as the use of Gorilla Glass on the front and back to avoid shattering.

Executive Vice President Injong Rhee takes the mic next to describe their new venture, Samsung Pay – a safe reliable way to pay for goods, without cash or credit cards. Through NFC, Samsung Pay is partnering with VISA, MasterCard and many other big names to achieve this. Gift and membership cards that are based on Samsung Pay are all in just one card now! “Your wallet is going to miss you,” Injong says. Through Samsung Knox, it makes it one of the safest solutions in the industry so you can rest assured your money is secured during transactions and payments. It’ll go live in August 20th in Korea and September 28th in the US following UK, Spain and many other countries. “Accepted virtually anywhere,” Injong ends his speech.

Both the phones will hit the international markets August 21st.