Previous Post
13 Of The Best Kitesurfing Spots Around Egypt
Next Post
7 Breathtaking Photos Ahead of 'Osiris, Egypt’s Sunken Mysteries' Exhibition at The British Museum

We were finally treated to a brief moment of joy on Game of Thrones. Let's see how long it lasts. 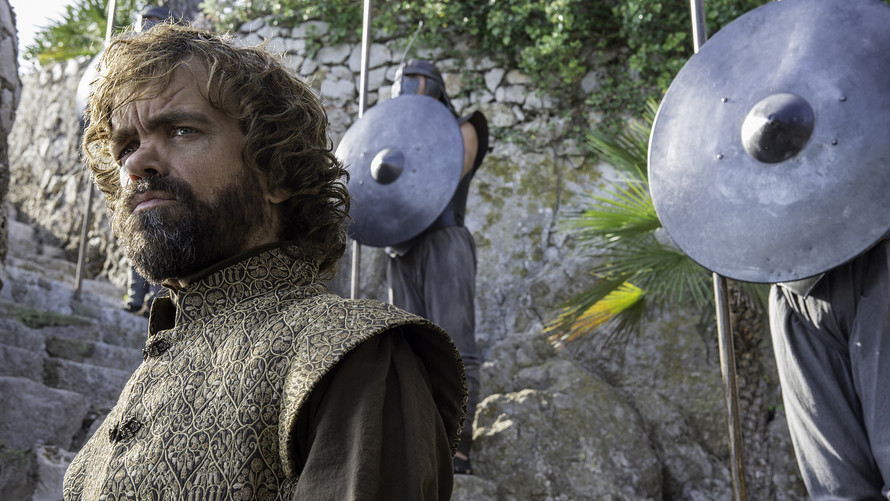 Finally! Something a little heartwarming and nice happens on Game of Thrones. When the horn blows at Castle Black, I was fully prepared for the next round of terribleness but, as the gates opened to Podrick, Brienne, and Sansa, I got a little verklempt. Watching Sansa look around the courtyard for Jon while he stands in the background trying to figure out who these people are, and then their mutual moment of recognition, was enough to make even the most jaded Thrones fan squeal and cry like they're watching a Pixar movie. If this were any previous season of the show, I would have expected Sansa and co.’s journey to take about four or five episodes to actually go anywhere, as the plot plodded and meandered its way through the established narrative; but, in this new, streamlined post-book season, things are moving much faster, and I think that’s just swell. Their little heart-to-heart serves as a fresh reminder that the Starks, however many of them may be miserable or murdered, were once a family. Kit Harrington and Sophie Turner act their pants off and deliver real weighted performances in what could have ended up as a scene that relied more on the audience's emotional reaction to fuel the drama. As they reminisce about the kidney pies of the past, Sansa takes the initiative to ask Jon what his next step will be. After he makes it clear that he’s not going anywhere without Sansa, she suggests they murder the hell out of the Boltons and take Winterfell back. She tells Jon that, as the son of a Stark, the other northern houses will rally to him and maybe even all those wildings he saved would come in handy, too, as they go after that douchebag, Ramsay. It’s almost enough to make a GoT fan dance a jig of joy that Sansa is finally done playing the victim and is ready to stand up and kick some serious ass. It’s just too bad that it took brutal sexual assaults for her character to develop just a little bit. Also, can we talk about Tormund’s giving Brienne the sexy face while he’s eating? That relationship would be terrifying and adorable, even if it’s just them yelling and sword fighting the whole time. Later in the episode we also get to see the show's version of the fabled pink letter from the books but without the underlying suspicion of its authenticity. After a brief face-off between Davos, Melisandre, and Brienne, where the Lady Tarth lets them know that she’s onto them and their blood magic, "oh and BTW I totally killed your king,” we’re off to the Eyrie. The Lord of things creepy and just sort of unsettling, Petyr Baelish, has returned from his treasonous adventures and immediately returns to manipulating the young, also creepy, Lord of the Vale against his loyal bannermen. After threatening Lord Royce with the moondoor if he continues to question Baelish’s involvement with Sansa’s capture by the Boltons, Little Finger manages to convince Robin Arryn that the knights of the Vale should ride out and rescue his cousin. I guess that takes care of Jon and Sansa’s manpower issue with retaking Winterfell, but I bet there will be some serious complications once Sansa walks up to Baelish and is like “Dude, so not cool selling me to that creep.” Nevertheless, Baelish seems earnest about his efforts to retake Winterfell by calling up another army in an episode that’s chock full of armies being set into motion. Looks like we’ve got some epic battles coming in the episodes ahead. Tyrion, still in charge back in Mereen, has set up a meeting with the Masters of the other cities of Slaver’s bay and has promised to let them phase out slavery over the next seven years in exchange for cutting off their support for the Sons of the Harpy. Tyrion gets the best zinger of the episode with his sick burn on his former master. "Please cut off funding to domestic terrorists,” “We’re not funding anything,” “Yea sure, just stop funding them, ok?” Tyrion is finally getting a chance to flex his leadership muscles, but at the expense of pissing off his pals Grey Worm and Missandei. Though they begrudgingly support Tyrion while he debates with the former slaves of Mereen, Tyrion should be careful lest he ends up losing their trust.
Meanwhile, the dynamic duo of Jorah and Daario have arrived at the Vaes Dothrak where their mutual love interest and queen has been put up with the Dothraki widows as they decide what to do with her. Jorah spends most of his screen time reminding the audience how old and useless he’s become. They manage to sneak into the city nonetheless and link up with Daenerys. The two bold rescuers insist it’s time to make a break for it, but Dany has other plans. Ever since she was taken by the Dothraki horde, it’s been clear that not only is she not going to be spending much time in captivity, but she’s also going to reclaim her position as Khaleesi of the Great Grass Sea – add that to her already ridiculous list of titles. Whether or not Jorah The Andal lives to see his Khaleesi make it back to Westeros, though, is looking less likely than ever. Watching him struggle up the hill and get his ass kicked by that bloodrider was tough, but once he missed throwing sand in the guy's face, everybody in the audience was like “lol, you dead.” Daario was there to save him this time, but if the greyscale doesn’t turn him into a rage zombie first, Jorah doesn’t seem like he’s long for this world.

Then it’s back to King’s Landing for an update on – surprise – Margaery! She’s let out of her cell long enough for the High Sparrow’s exposition about his background before he became the head fanatic of a cult obsessed with the number seven. She then gets to see her brother Loras for the first time in a while, and he’s definitely looked better. I’m not sure exactly what the Faith Militant has been doing to him, but he looks like shit and he’s eager for anything that might release him – even if that means his sister has to do the same kind of walk of shame that Cersei did.
Speaking of Cersei, whether or not it’s because Margaery is the queen or she just wants to save another woman the humiliation of the poop walk, but the Queen Mother is determined not to let that happen. She even manages to convince her uncle and Lady Olenna to finally join her side to bring the Tyrell army into the city to rescue Margaery before her naked body is pelted with turds. On the sea approaching Pyke, Theon has a moment reminiscent of the last time he sailed there, but, instead of gross, sad sex with a cabin wench and dreams of glory, he’s a bit sadder. His sister accuses him of showing up just before the Kingsmoot to steal leadership of the Iron Islands out from under her. Theon magically seems to get out of his snivelling funk long enough to let Yara know that he supports her bid for control of the Ironborn. I can’t decide if this plot is really all that interesting or not, yet, but I guess Theon’s return to Pyke is only going to make this whole Kingsmoot business more interesting.
The end of the episode is one of the most memorable and self-referential of the series so far. After being brought in to the great douchebag powwow, the Dothraki call the Khalar Vezhven. While the Dothraki fraternity brothers decide what to do with her (none of her options are pleasant), she speaks up and recounts the last time she was in the temple of the Dosh Khaleen when she ate a horse heart and Drogo yelled a bunch. She claims that none of the assembled guys with blatantly fake beards are fit to lead the Dothraki, but she is. She gets called a bunch of mean names, smiles, and then shows why she is called 'The Unburnt'. As she dumps the buckets of liquid fire, which was lighting the wooden hut they were all gathered in, she proves that the bit with the dragon eggs and Drogo’s funeral pyre way back in season one was no fluke. This time, though, it’s not just a few Dothraki stragglers that bear witness to her naked and probably still kind of sweaty body, but the entirety of the Dothraki civilisation.