Superheroes, spaceships, and sequels to movies from when our parents were our age - what an amazing time to be going to the cinemas. 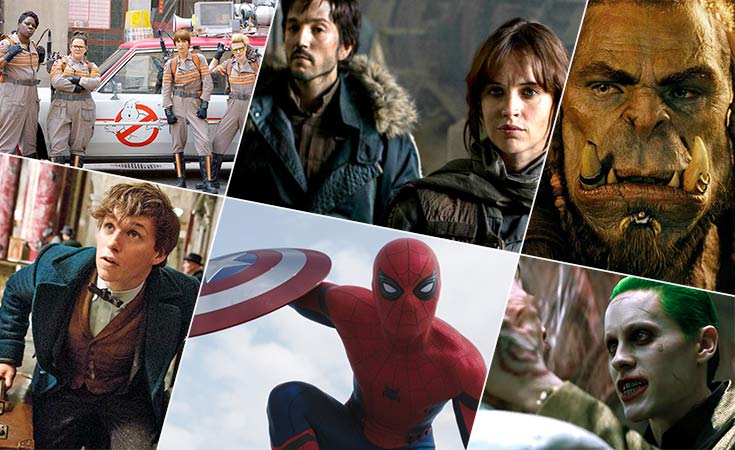 This year has already seen some massive movie releases and still it looks like there are even more to come. So much so that we had to lump all the new teasers into one round-up instead of giving each the spotlight they normally deserve. That and we're kind of lazy. So rev up your Torrent client of choice and get ready to spend a lot of money in the cinema because if these trailers are any indication, you're not going to want to miss any of these.

The second movie this year that has famous comic book characters beating the ever loving crap out of each other, Civil War has a way bigger roster. Adding Black Panther and finally debuting this universe's version of Spider-Man also has fanboys and girls foaming at the mouth with anticipation. This quick clip shows off Team Cap putting the hurt on some nameless dudes with guns. Falcon taking off his wing to use for a shield, and Scarlet Witch using telekinesis to throw Captain America through a window are definitely highlights. Civil War hits theaters in May.

The next superhero to be introduced into the Marvel cinematic universe, Doctor Strange opens the door to the magical world we've only seen glimpses of in the other Marvel flicks. The trippy trailer shows off exactly how crazy things are about to get and gives us an idea of how Sherlock actor Benedict Cumberbatch is handling his role as the sorcerer supreme. The idea of Strange joining the likes of Iron Man and Thor in the future has the geeky part of our brains almost short-circuiting. Almost. Doctor Strange releases in November.

The next chapter in the kind-of-rebooted X-Men film franchise sees the return of old favourites that have been absent from the last few movies and casting super-hunk Oscar Isaac as the big bad mutant Apocalypse is a win for everyone. Since Fox owns the rights to make X-Men movies though, and neither they nor Marvel seem all to keen on working together, we'll have to hold our breath to see Wolverine or Storm show up alongside the Avengers. A nerd can hope though. Apocalypse arrives in May.

Enough about superheroes, where's the love for supervillains? The follow up or prequel or whatever to Batman V. Superman follows a group of supervillains who have been promised mitigated sentences in exchange for cleaning up some shady black-ops messes. The movie will be our first look at the wider DC cinematic universe, including Jared Leto's divisive take on The Joker. The trailer gives us a good look at some more of the action scenes. Look out for Suicide Squad in August.

Not really a movie but we're going to count it anyway. Everything's really looking up for the remnants of the Stark family and the rest of the inhabitants of Westeros and Essos. Of course we're just kidding. Everybody's either dead, undead, dying, or just plain miserable. This season is going to be very interesting for fans that have read the books since the show has overtaken them. Even though the books have departed rather significantly from the books already, not knowing at all where things are headed from here is sure to make readers of the books lose their aloof sense of superiority. The next round of Game of Thrones starts April 24th.

Fantastic Beasts and Where to Find Them

A prequel set 70 years before Mr. Potter's famous adventures, Fantastic Beasts shows us how magic works across the pond. Set in 1920s America and telling the tale of a bunch of dangerous mythical beasts who escape their enchanted briefcase, fans and newcomers to the wizarding world alike should have plenty to look forward to when the movie comes out in November.

The Legend of Tarzan

We can't imagine anything better than watching a shirtless Eric Northman (aka actor Alexander Skarsgård) swinging from trees in a jungle. If True Blood has taught us anything, it's that anytime Sarsgard takes his shirt off, it's a good scene. Also Harley Quinn is in this so it's basically two hours of watching genetically blessed humans frolic around in a jungle. Watch out for Tarzan's six-pack abs in July.

The next movie in Disney's live action re-imagining of its animated classics, The Jungle Book, features an all-star cast voicing photo-realistic animals. Since everybody kind of already knows this story already we'll just fill up the rest of this space with the list of cast members: Bill Murray, Ben Kingsley, Idris Elba, Lupita Nyong'o, Scarlett Johanssen, Giancarlo Esposito, and Christopher Walken.

Independence Day: Resurgence is riding on the nostalgia wave of movies getting sequels after 20 or more years languishing as reruns on American cable TV channels. Though there's no Will Smith this time, everybody else seems to be on board, including Jeff Goldbloom. After all this time, we see that humans have might a bunch of advancements but it looks like the aliens have too. Now let's just hope for another uber-patriotic America-centric speech about coming together as a world. Independence Day is in June this year.

Nerd-alert: Warcraft brings the world that every masisively-multiplayer-online-role-playing-gamer has been living in for more than 10 years to the big screen with way better graphics and with direction by the son of David Bowie. While we may not understand the minutia of Orc-Human politics, we're still down to watch the two species beat the CGI crap out of each other. Watch out for Warcraft in June.

Now that J. J. Abrams has moved on to Star Wars, Justin Lin of Fast & Furious fame has taken over the Star Trek franchise for its third instalment. Star Trek: Beyond sees the crew that we've come to know and love stranded on an alien planet on the stellar frontier. Hopefully this leads into some kind of serial series so that we don't have to keep waiting three years to get our fix of Kirk and Spock. Star Trek: Beyond arrives in July.

Sequel/reboot to a classic movie from like 30 years ago? Well it certainly worked for Mad Max. The all-new, all-female Ghostbusters are going to be who this new generation is 'gonna call' for an inevitable sequel if this one does well. Lady-Ghostbusters comes to town this July.

The sequel to the beloved modern classic Finding Nemo, that shows it's apparently very easy to get lost out there in the big wide ocean. Finding Dory is sure to be full of the same loveable characters and mind-melting eye candy as its predecessor. Be on the lookout for Finding Dory this July.

Rogue One: A Star Wars Story

If there's one thing that the general public learned from the resounding success of The Force Awakens, it's that there is plenty of demand for more Star Wars. Kicking off the yearly tradition of Star Wars movies, Rogue One is the first anthology film, telling a story outside of a trilogy. In this case it's the story of how the rebels managed to get their hands on the plans for the original Death Star that some backwater farmboy blew up in the original 1977 film. Fans are hoping to see some badass Darth Vader action and better look at the Death Star's transportation system. Us? we're just hoping that we don't have to hear our staff writer Skot talk about this crap anymore. Rogue One launches in December.