"Bulimia Is Like Cocaine - You Can't Stop." How One Girl Reclaimed Her Life From The Disease

Largely unspoken about, bulimia is an eating disorder that affects thousands of Egyptian women who are left to endure a solitary struggle in an environment that does not understand them. Valentina Primo meets an Egyptian recovering bulimic to find out how she paved her own way back to health. 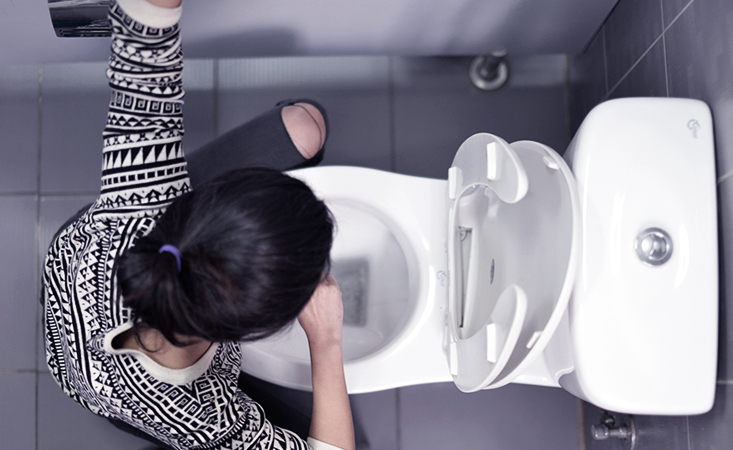 “It’s been only 10 minutes since I got in the car and I have already eaten four chocolate bars. On my way home, I stop at several supermarkets to buy more and eat them while I drive; I don’t want anyone to see me eating. I feel disgusted with myself. As soon as I get home I will vomit. This has to stop; tomorrow, I will fast.”

Mona* was 21 years old when she forced herself to vomit for the first time. “I will never forget that day. It was my sister’s birthday and I had decided to cheat on the diet I was doing. I started over eating; I devoured each and every kind of food on the table,” she recalls. “Then I felt really, really bad. When the party was over, I weighed myself and I was five pounds (2.5 kilos) heavier. I went crazy, I told myself: ‘I need to get this out, now.’ So I put my fingers in my mouth and vomited everything. When I got on the scale again, those five pounds were gone.”

While studying at the German University in Cairo, Mona used to exercise routinely and followed a very strict diet, one that she would never cheat on. Controlling her weight was part on an obsessive routine that included standing on a scale five to ten times per day. “I was obsessed. I had a six-pack, I had muscles and I was toned, but I kept thinking I needed to be more fit. I wanted to be perfect,” she says as she pulls out a photograph of a very flat stomach in front of the mirror.

Mona took on the dangerously solitary road of bulimia. The eating disorder, which can sometimes be confused with anorexia, is characterised by binge eating large amounts of food very rapidly, and then purging, usually by inducing vomit. She would often retreat to her car to eat where nobody could see her. “None of my friends knew that I would vomit after eating junk food. If I was with them, I would just tell them I didn’t feel well and go to the toilet,” she says. “I didn´t feel comfortable eating in front of people, I didn´t feel normal. But as soon as I got home, I started binging (over eating) until I felt so sick that I couldn’t move. And then I would vomit it all.”

Walking into the unknown

The eating disorder intensified as Mona finished university and started to work, but the 24-year-old woman was not aware of what bulimia was. In fact, nobody in her entourage knew about the existence of such an eating disorder. “I only found out when I Googled the phrase ‘how to vomit easily,’” she says. “I was doing it every day, sometimes three times per day, and after a while your body gets used to it. At some point, I put my whole hand inside my mouth and I couldn’t vomit anymore. I tried using things like shampoo, or a brush.”

Mona’s obsession over her figure reached its peak when she convinced her parents that she undergo a surgical operation to implant the gastric balloon, a device consisting of two connected balloons filled with saline that take up space in the stomach, presumably making people feel fuller faster.

“I convinced my mom and dad by telling them that I had to do it because I was not menstruating anymore, and I kept it for six months. The balloon actually made vomiting easier, so I loved it,” she says, emphasising that vomiting however does not help people lose weight. “When you are bulimic, you don´t actually lose weight; because if you are binging, you are eating a lot of calories, so the weight stays the same,” she explains.

For one year, Mona didn´t menstruate. “I went to six different gynecologists to find out why, but I didn´t tell them that I was bulimic. A friend of mine was actually the first person to tell me what I had; she was the only one I confessed that I was vomiting to.” However, reading about the eating disorder and acknowledging her disease did not help her stop. “I didn´t stop it because I was comfortable. It was like cocaine. Every time you vomit you cry and think ‘I am not going to do this anymore, I am not going to eat anything tomorrow’, but the next day it’s the same story again. You keep on drinking water and vomiting, because water makes you vomit more. And after you vomit, you always want to eat again,” she explains.

Three years went by, and Mona’s habit only intensified, pulling her into a vicious circle where deteriorating self-esteem and isolation played a considerable part. “Whenever I knew I was going to be home alone, I would start to over eat, everything… even the things I don´t like,” she recalls. “You want to have this feeling of sickness so that you can vomit, because if you eat a normal meal you will not be able to vomit. I isolated myself, I couldn’t concentrate at work, and I didn’t want to go out. And if I did, I would leave early in order to go home and binge. It was awful.” The monitoring sheets in the book 'Overcoming Bulimia Nervosa and Binge-Eating' were vital to Mona's recovery.

Three months ago, as she began to feel constantly exhausted, she started seeking help. But, alone and in a country with skeletal infrastructure, she felt hopeless. Not finding any institutions in Egypt, Mona sent emails to fitness organisations in the UK and USA, hoping that they would provide her with a healthy plan; but their reply was conclusive: she needed to seek a psychiatrist. “I had appointments with psychiatrists in a center in Zamalek and they didn´t show up. Twice. They excused themselves saying it was the first time they had someone with bulimia,” she says in disappointment. “I felt desperate, I couldn’t stop crying.”

“My mother did not believe me”

“Telling my mother was the hardest thing ever. She never understood it. When I said I was bulimic, she replied: ‘What is that? No, you have nothing. You are fine,’” says Mona, who had to provide reading material online and offline for her mother to get acquainted with the eating disorder. “This was the hardest period. I was really aggressive. I never smiled, I never laughed anymore. I stopped being cheerful, I lost my social life and a seven-year-old relationship,” she says. “I would fight with my mom a lot. I would cry and tell her ´why do you never ask me what is wrong with me?' I told her that I needed her to understand, I really needed her; her and no one else.”

Emotional support and parental guidance was, according to Mona, vital to her recovery. “I read on the internet that it was important to tell my friends and family, so I did. One of my them gave me a self-help book called Overcoming Bulimia Nervosa and Binge-Eating, which really helped me. And I was really happy because I found that people cared,” she expresses, although the biggest factor to her recovery was her own mother. “But I never told my father or my siblings; they would have never understood,” she stresses. “The worst word anyone can tell you is ‘stop eating.’ I can remember each and every person who said that; the place, the time, the look on their faces. It made me nervous, and made me eat more. Every time I heard it, I would think 'ok, I am binging tonight.'"

Her search for medical assistance found an answer when she called the Psychological Medicine Hospital El Nozha El Gadida. “I called them feeling like a homeless person desperately seeking help. I remember I said: ‘I am a bulimic person and I need to recover, I am 24 and I am losing my life,” she says. Her psychiatrist, who now considers her a hero, gave her a monitoring sheet to register her urges as well as anti-depressant pills.

“I cried each and every single day because the urge to eat follows you all the time. Some days I thought: I want to sleep early today, I don´t want to think about food,” she recalls. “Later, I learned that there are automatic negative and automatic positive thoughts that can be changed.”

According to Mervat Nasser, author of Eating Disorders and Cultures in Transition, while eating disorders were once viewed as exclusive to specific class and ethnic boundaries in Western culture, they have become a worldwide phenomenon. According to Mona, who was once a professional athlete herself, it is very common in the Egyptian fitness environment. Although Cairo does not come with dedicated centres, bulimia can be diagnosed and treated by family medicine physicians, psychiatrists or psychologists, licensed mental health counselors, and registered dietitians.

Last week, Mona had her period once again; and the last time she induced vomit was three months ago. But she is aware that in the path to full recovery, there is still a long way to walk. “Bulimia destroyed my life,” she states. “Sometimes, I don´t want to go to certain places because it reminds me how bad it was. I didn’t think I could be a normal person again.”

*In order to preserve the interviewee's privacy, and following her request, her name has been changed.