Carpet weaving is a craft that has been used for centuries and has made it into modern Egypt despite globalisation and mass production. 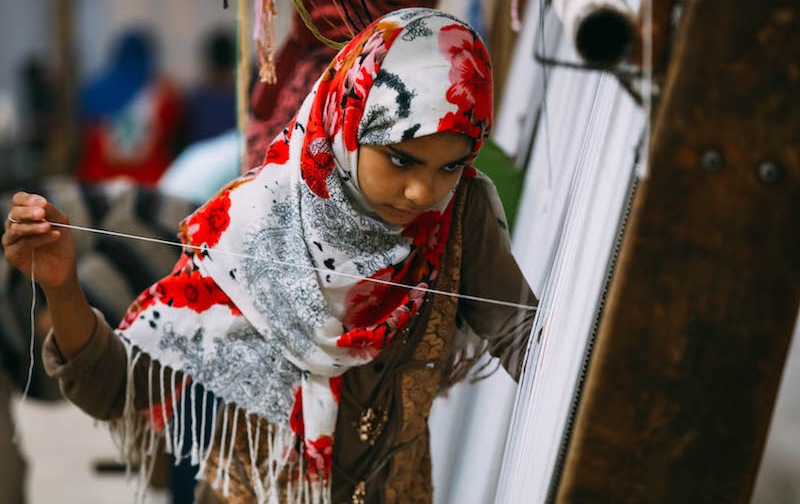 Known for being a lively tourist hub, and home to the iconic Step Pyramid of Djoser, Saqqara is an area teeming with heritage and history that is often overlooked by those born and bred in Egypt. What many aren't aware of though, is that Saqqara is the spot keeping alive one of Egypt’s oldest and most intricate crafts: carpet weaving. Hidden between stretches of farmland, tuk-tuks transporting their passengers and local women carrying bread baskets on their heads, is the beating heart of Saqqara’s expert carpet weavers, passing down the craft to younger generations.

The Akhnaton weaving school is one of the many institutions passing down the skill pioneered by our forefathers. The third school in a family of carpet weavers, Akhnaton's co-owner and vice president, Amer Ibrahim Fayed tells us of the legacy that started with his grandfather.

"It all started in Shabramant, an area in Saqqara. My grand-father started a small carpet weaving shop, and my uncle and father built a name for it it, eventually opening a second school," recounts Fayed. "This school is the third one, and it's been open since 2000. Carpet weaving is a trade born and bred in Saqqara, and our handmade carpets are known worldwide. Those living in Saqqara have grown up proud of their heritage and want to follow in their fathers' footsteps. My father taught me how to weave when I was younger."

A trade passed down from father to son, the intricate craft has found its way to an era where most goods are mass-produced, and have lost the history interwoven within their threads.

“The handmade carpets are more expensive because weaving a carpet takes months sometimes, and the process is quite difficult. For example, it takes about one to two months to make a meter of carpet using wool,” says Fayed. “The value of handmade carpets goes up with time, and the prices can range anywhere between EGP 20 to EGP 70,000. The most expensive carpets are the ones made of silk, while the wool ones are much cheaper.”

Those interested in mastering the skill are initially taught how to manipulate the wool or the silk fibres into knots. Once they’ve learnt the knotting process and how to tighten the threads, the next step is interlacing them to form the picture that’s placed on the loom. Eventually, students who've mastered the craft can work on their own loom; looms are the devices used to weave the carpets.

"They need to get the hang of weaving the drawings placed in front of them to create the design on the carpet by manipulating the knots. Once they’ve learnt how to do so, they can handle their own loom,” explains Fayed. “It’s not, however, specific to a certain age; anyone can learn with the right training. It’s better taught at a younger age because it’s difficult, and when you’re younger, you have the capacity to learn faster.”

Saber Salah Saber, a teacher at El Tohamy Carpet School, a neighbouring school to Akhnaton, has been working in the field for 35 years after being taught by his father at the age of 10.

“There are several types of looms. The one perched against the wall is mainly for weaving carpets, and it's worked by following the drawings placed in front of the weaver. The loom that looks more like a table is for the artists,” elaborates Saber on the different types of looms. “We call the table loom 'sho3'l fananeen' (artist work) because it requires creativity, and doesn’t follow the square drawings that the other looms do. The weaver creates whatever he feels like creating. The hardest type to make though is faces, because getting the facial expressions just right, the creases from a smile or a frown for example, is difficult.”

While weaving factories and workshops can usually be found in areas such as Monofeya and Kafr El Sheikh, the grand majority of them are located in the Saqqara area, which sees a higher number of tourists.

“This is the school where we teach, but we have the main workshops where we make all the carpets in Kafr El Sheikh and Monofeya. The kids come in summer and they train for around two to three months, depending on how bright they are. And sometimes, if they’re fast learners, it ends up being their own personal source of income. They’ll buy their own loom and their own material, and do their own thing on the side.”

Carpet weaving is one of the oldest surviving crafts in several countries including Turkey and Iran. Carpet weaving in Egypt is believed to date back to the 15th century, with the North-African country traditionally being the epicenter of carpet-making in the Arab world. Akhnaton's co-owner Fayed adds "when we go to international exhibitions, our handmade carpets compete with Turkish and Iranian ones. Egyptian handmade carpets are beautiful. It’s a tradition we should revere and grow because it’s something distinguishing about Egypt."

Hanging among the detailed designs in Akhnaton is a four by six metre carpet, made with intricate patterns and vividly colorful designs. An emblem honouring the owner, the painstakingly crafted work of art is one of a kind in it's grandeur, and is not for sale.

“It’s hard to make these types of carpets these days. This is piece is a tribute to the owner, and it took four years to make.  I wouldn’t be able to make another one like it,” says Fayed of the piece. “No one is going to have the patience to work on something for that long nowadays, not without seeing immediate results.”

Ismail Sayed is a teacher at Akhnaton and similarly to his colleagues, inherited the trade from his father; he has been at it for the past 40 years.

“I learnt the trade when I was 15-years-old. Those who want to learn, come during the school holidays and they work for four hours a day with a one-hour recess,” says Sayed. "My kids, for example, are in school and university, but I've managed to teach them the craft."

In a report released in 2005 by UNICEF, Egypt was estimated to have around 1 million homeless children roaming the streets, mainly in Cairo and Alexandria. Another UNICEF study released in 2016 showed that Egypt has 3.6 million unemployed persons with an unemployment rate of 13%.

By arming these children with a craft that is also part of their heritage, these weaving schools are giving them a tool for survival. Sayed adds that, "the benefit of having  them learn this trade, regardless of whether it'll make them rich or not, is the financial stability. Whatever they decide to do in life, whatever diploma they decide to get, this trade can help make ends meet until they get the job they want, at the very least."

When 14-year-old Fathy Farrag initially came, he couldn't find anyone to teach him. Eventually, one of the teachers took him under his wing and taught him all the tricks of the trade.  "He sat me down and taught me everything. I practiced until I got better and now work my own loom. I come here when I have time off from school because I want to learn how to weave. It makes good money, and eventually I want to get married, settle down and live my life."