Taxes For Dummies: The Ultimate Guide to Understanding Taxes in Egypt

History has it that ancient Egyptians had an elaborate tax system. That's still true today. 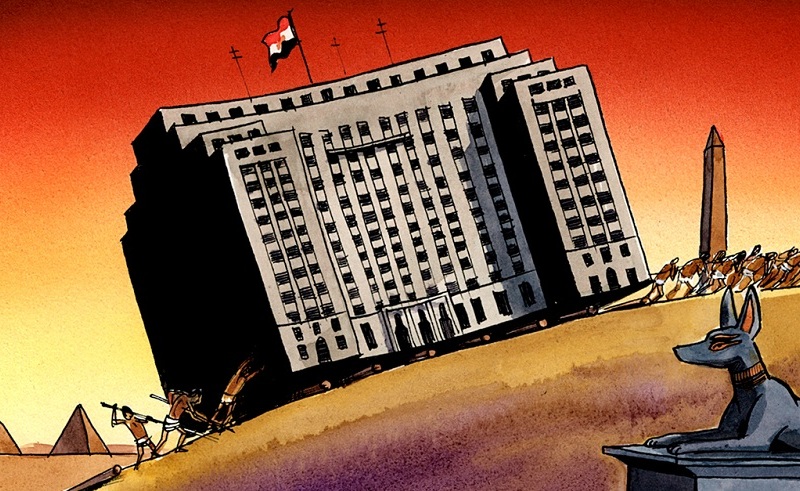 It's often quite a bitch to discover that, after working so hard all month long, a hefty sum of your personal income gets deducted for taxation purposes. It's also terrible to find out that the harder you work and the bigger your income, the bigger the chunk taken from it is, not to mention the many other types of taxes that are already weighing us down, and the painfully exorbitant economy we all know and love.

Yes, I hear you guys. I was once there, too, when I discovered that there's income tax, Value Added Tax (VAT), real-estate tax, sales tax, sin tax*… and all for what, when the economy isn't so easy on our wallets? And that's besides the informal baksheesh that you pay out of the goodness of your heart.

*(VAT, sales tax and sin tax are things you don't have to exactly worry about as an individual, since they're already calculated into the total price of whatever you're purchasing).

Sometimes the taxes are so bad, that buying your regular Nissan in Egypt could easily cost you as much as a brand new Mercedes in Europe. Head of Egypt's Custom Authority Magdy Abdel Aziz explained in 2017 that purchasing a EGP 1 million car could cost you a custom tax at an extra EGP 1.35 million – amounting to more than just the cost of the car.

This brings us to other kinds of taxes – like the Value Added Tax, which you can easily distinguish on a receipt from a supermarket, for instance. "If you don't get a receipt, then it's unlikely this product or service is paying their taxes," Head of the Egyptian Forum for Social Studies Dr. Rashad Abdo said in an interview.

If you don't get a receipt, then it's unlikely this product or service is paying their taxes.

On tax evasion, Dr. Abdo went on to explain the many services that may go to great lengths to hide their actual revenues– such as a hospital which treats 1,000 patients, for example, but only keeps tax records of 30 percent of them. This, according to Dr. Abdo, is the cause for Egypt's large percentage of tax evasion.

When it comes to income tax, however, it gets trickier to manipulate the system. If you make anywhere up to EGP 7,200 monthly, you don't owe any taxes. The higher the salary goes, the bigger the tax is, as broken down in the figure below. Real-estate tax, on the other hand, is one that hasn't changed in Egypt since 1954. The tax is applicable to any land or property in Egypt above the cost of EGP 2 million; the added total of different properties are included in this aforementioned cost, unless they are located in separate governorates. In other words, if you own two apartments in Cairo that cost more than EGP 2 million put together, you've got real-estate tax; if the one of the apartment was in Alexandria, and the one in Cairo costs less than EGP 2 million, you're good.

The real-estate tax is levied on any type of property on the land by the landowner, whether a garage, an unfinished villa, or a rented apartment. Moving on to tax evasion: the act of finding loopholes in the system to not pay for your taxes, or paying much less than your income requires you to pay – a con art which Egyptians have come to master.

Egypt has lost $22.3 billion in the fiscal year of 2016-17, said Emad Samy, head of the Tax Authority, to The Arab Weekly. Samy claimed that only 40% of the taxes to be paid by individuals and businesses were actually collected. An example of 'Informal economy.'

If everyone evades their taxes, how could governments finance themselves and provide public services? Then comes the argument of whether one should lookout for oneself as they try to earn a decent (or even barely enough) living away from the government's taxations, which could be seen as specially valid in countries where governments are known not to be trusted with people's money.

Then there's also the argument that paying your taxes promotes economic growth on the long run – the same way investing in a good education does to your personal future.

Well, what happens when you don't pay taxes? In some cases, people do get away with it. In other cases, however, people get fined or receive penalties for paying taxes. Tax evasion can even warrant you an arrest order.

However, keep in mind that not paying your taxes also means that you're not paying for the road maintenance or the construction of highways that make everyone's lives, including yours, easier. Reason #1 to pay your taxes: traffic.

Paying your individual taxes to an efficient system means receiving national protection, healthcare, and education, as well as the maintenance and construction of roads, bridges and highways. The government doesn't fully cover these projects, but they sure do make it a whole lot cheaper.

So What Is the Point of Paying Our Taxes?

Well, first off, your tax money goes to plenty of things that benefit the country. Take education, for example, or the roads and the bridges we drive on. The government - in an ideal situation - takes care of the country with the taxes we pay; it is considered a civic duty - something you give to your city in order to get a return.

The deficit that lingers following the lack of taxes being paid ends up being borrowed by the government in loans, which thus puts Egypt in a constant condition of deficit.

But people don't want to pay their taxes because they feel like it's a waste of their money - and no, not only in Egypt. Everybody hates taxes, even the people who live in super clean cities where their tax money is more readily apparent in how paved the streets are, or the smell of the freshly painted curbs and the super punctual public transportation. Some people are turning to cryptocurrency in order to avoid paying taxes.

The deficit that lingers following the lack of taxes being paid ends up being borrowed by the government in loans, which thus puts Egypt in a condition of deficit, Dr. Abdo further explained.

As part of its extensive reform program, Egypt's Ministry of Finance is currently implementing its first digital tax payment, set to complete by 2020; this, according to the ministry, will help avoid long queues at the tax office, which will encourage individuals and businesses to pay up.

Making taxing digital also means that tax evaders will be on the watch, as tax returns will be received either electronically or at the Tax Authority Office.

While the road may look bumpy to many at the prospect of paying such hefty taxes, on the long run, it will could potentially the country in the sound promise of your taxes being put into a better future.