Graffiti by the Graves: Meet the Woman Bringing Art to Cairo’s City of the Dead

In the heart of an Islamic cemetery that 1.5 million Egyptians call home, a cultural initiative led by a Polish architect is bringing graffiti, sculptures, and handcraft workshops to an area plagued by stigma. Valentina Primo speaks to Agnieszka Dobrowolska, the woman behind the project. 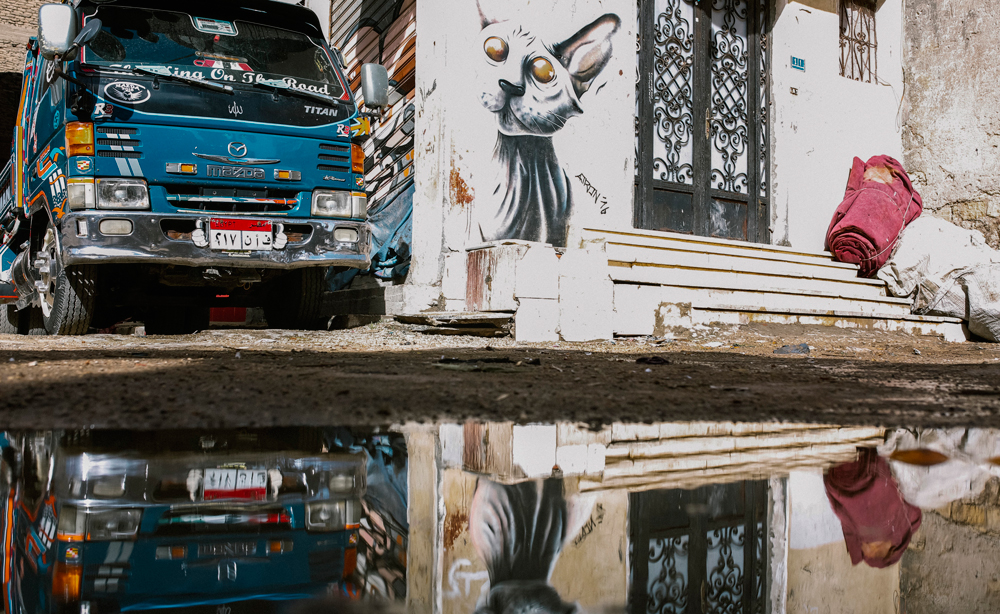 3am Mosaad is sitting outside his carpentry workshop, a cigarette in one hand and a cup of tea in the other. His rounded eyes are molded by fatiguing years, his skin cracked by decades of unyielding work crafting furniture for his customers in the City of the Dead, the 1.5 million-strong neighborhood that sprawled in the midst of a necropolis. "I have always lived here; this is where I got married, this is where I had my children, and where I lost my wife," says the 70-year-old man. Next to the rickety workshop where his son struggles with a handsaw, a man with a tray, where three cups of tea dance to the pace of his saunter, grins. The café is filled with paintings depicting Nubian characters of glorious times past, and is bustling with customers.

Unlike lugubrious - often Orientalist - portrayals often depict it, this crowded neighbourhood is not a somber, dark place. A city within a city where numerous families live alongside graves and mausoleums, Cairo’s City of the Dead is, ironically, full of life. “There is great stigma associated with this place. But this city is very much alive; it’s full of colour, cultural heritage, and children running around,” says Agnieszka Dobrowolska, the Polish architect who made Cairo her home and set off to bring the area’s untapped heritage back to life. “The City of the Dead has a very traditional community, one that doesn’t have a lot of opportunities to be exposed to arts and culture. That was the motto of our project: ‘art comes to people,’” she says, explaining her initiative. Titled ‘Outside In: the Art of Inclusion,’ Dobrowolska’s initiative filled the area with sculptures and graffiti, and to this day leads workshops to enhance the skills of the local craftsmen, as well as organises events which gather hundreds of people from the local community for artistic displays.

“One of our aims and hopes is to remove the stigma and put this area back on the cultural map of Cairo,” says the architect. “We are working together with the local community because we believe in the UNESCO convention's principle that says 'don’t think about us without us,'" she elaborates. "Local residents understand the value of this area and consider it theirs, so we contribute to its maintenance."

This place was never meant to be just for the dead.

Next to Mosa'd's shop, the towering minaret of the Sultan Qaitbay mosque rises. The building is part of a 14th century complex created by Sultan al-Ashraf Qaitbay, along with a Mamluk mausoleum and Islamic-style residential buildings. “This place was never meant to be just for the dead, from the beginning,” says Dobrowolska. “The complex of Sultan Qaitbey, which is inside the City of the Dead, was built in 1474; the area was an entire 'royal suburb', including various charities and providing housing for the many people employed there,” she explains. Stretching for kilometres along the Moqattam hill, the cemetery grew with population and in the 20th century, when Egypt’s population boomed, guards brought their families to live inside the mausoleums and more people settled there.

“After the 2011 uprising, there was a construction boom in the cemetery, as regulations were not strictly enforced,” she adds.

Now declared a World Heritage Site by UNESCO, the complex is being restored and revived by Archinos, the architectural and design firm Dobrowolska runs. While the Sultan’s hall has been adapted for use as a hub for cultural events, the organisation brought contemporary artists from different countries to contribute their pieces to the neighborhood.

We also want to reach out to people to teach them about the artistic and historical value of the place they live in. They know it’s old; but that’s all they know.

“We know they have basic needs; but culture is in fact a basic need. A lot of people are deprived from it, but human beings have always, in different circumstances, created art. Our project is in part to show them different ways of thinking, even in a small way, by bringing artists to help craftsmen design their products,” says Dobrowolska. “This helps them not only to be more creative, but also in bringing economic opportunities so that when they sell, they have a bigger clientele. We also want to reach out to people to teach them about the artistic and historical value of the place they live in. They know it’s old; but that’s all they know.” Next to the complex, between the sheltered graves where entire families dwell, Sayed Salah Bayoumi tiredly climbs the staircase that spirals upwards connecting the small rooms where his family lives. On the last blue-walled floor leading to the terrace, four aluminum jars defy inertia as they stand on a rickety wooden shelf. “Everyone here was really happy to see these activities happening. This area used to be abandoned; everything was in ruins and broken,” says the local resident, who helped visiting artists with food and drinks when they came.

“When we first came, local residents told us: 'Well, you come here to fix our buildings, but what about us? What about our life?' This is where the social development component of our project began,” Dobrolska recalls. “So we consulted with them on the kind of courses and workshops they would like to have, and we set them up,” she says as she lists the number of workshop support activities the foundation has created for local dwellers to enhance their crafts. From Bayoumi’s rooftop terrace, alongside colourful tombs, the pieces of graffiti stand out. One of the artworks, made by a German sculptor, is called ‘A gate to another world’. “This is what best describes what is unique about this place; this is a place where everything meets; art and tradition, old and new, life and death,” she says.

“Whatever you write, just please don’t describe them as ‘underprivileged,’” Agneska tells me before we leave. “A couple of months ago, we had an arts workshop with children and, as it finished, the children looked for the articles about it and used Google translate to read them. They did not like being described as such and they were very upset,” she says. Because, even if their living conditions may seem somber to others, the City of the Dead abounds with life. For no matter how eerie the idea of living in a mausoleum may appear, if there something its residents have not lost is their sense of dignity.