Hijabi Fashion and the “Enslavement of Women” 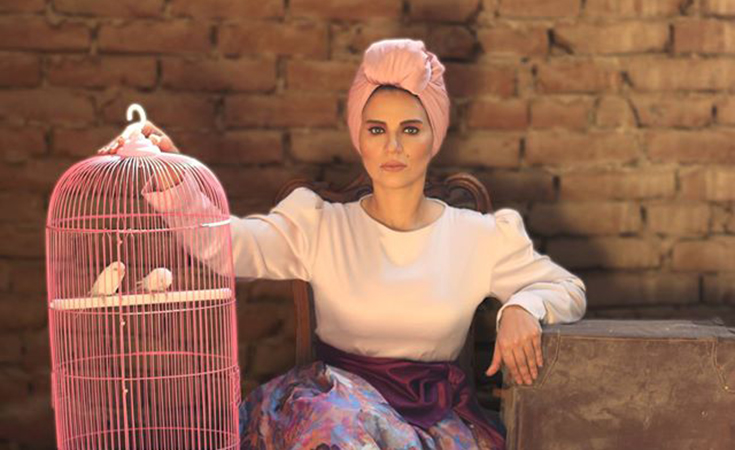 Her comment followed Yves Saint Laurent Co-Founder Pierre Berge’s harsh criticism of the fashion chains who follow the lead of Italian designers Dolce & Gabbana, who released their hijab and abaya collection last January. "Designers are there to make women more beautiful, to give them their freedom, not to collaborate with this dictatorship which imposes this abominable thing by which we hide women and make them live a hidden life," said the former fashion mogul, who was a partner of the late Yves Saint Laurent and lives most of the year in Morocco.

Berge's comments raised eyebrows in the Egyptian fashion scene, where brimming designers are paving their way to international markets with collections that combine both sexy and modest garments. “A really good brand gets closer to people; they need to understand their mentality. Dolce & Gabbana thought of creating something for those clients who were already wearing their brand, but now will actually have their outfit for people to see,” says Farida Temraz, whose couture designs took Egyptian fashion to the SAG Awards and the Oscars this year. The young designer, whose collection is displayed at a Beverly Hills showroom, says 70 per cent of her clients in the Arab region are veiled.

“You can’t deny that there are people who choose to be covered and, as a designer, I need to respect it. How can I ask people to be in peace with my person and designs while, as a designer, I can’t accept who they are?” says Mohannad Kojak, a rising Egyptian icon whose striking campaigns often include veiled models. Kojak's last FW Campaign, Beyond the Veil, features his mother.

Known for his bold standpoints, Kojak frequently uses the power of storytelling in his photo shoots to spark interest and trigger conversations. “If I don’t like it, I can work indirectly to change it, but it’s very personal. It’s like going to a nude beach and asking them to cover themselves,” he says.

“I believe that if the veil is forced upon the woman, it is definitely oppressive. But if there is a woman who wants to be free and naked, you wouldn’t assume she was pressured by society, so why would you call someone who chooses to be covered oppressed? I feel both are the same,” he explains. “Here it is a different market. Maybe in these communities they are being strict in creating certain silhouettes," he says, just as England’s Advertising Standards Authority banned a Gucci ad last week, for using unhealthily thin female models. "These brands are not supporting women who cover; they are trying to make them prettier.”

Sara Hegazy is a Dubai-based Egyptian designer whose award-winning designs parade down catwalks in New York, Paris, and Dubai. She was the first Egyptian couture brand to be featured at London fashion Week 2013, and featured at both the Tiffany New York Fashion Show and Paris Fashion Week in 2014. And she wears a hijab. "I respect everyone's choice, from their religious view to their presence and chosen outfit," says Sara Hegazy, whose Cleopatra collection was featured in Paris Fashion Week in 2014.

“Because of my principles, I respect women's freedom and give them the ability to choose their apparel. We have to be fair: veiled women have the same right to wear stylish items as everyone else,” she says, referring to Berge’s statement that “Principles should come before money,” as he accused brands of being complicit to the “enslavement of women” in order to make money.

“For the sake of principles,” she insists,” I respect everyone's choice, from their religious view to their presence and chosen outfit, unless it's rude or insulting. I believe in human rights, so I see it's a must to respect human choices.”

Berge’s comment strikes as an irony to Egyptian designers, especially given the relevance the word ‘slavery’ has in the fashion world today, reminiscent of tailoring workshops in Bangladesh and other countries where women and children work in dire conditions, with no safeguard for human rights.

“Mainstream fashion is racist,” Kojak says. “Even in the Middle East, they rarely accept someone who is veiled and fashionable,” he says, adding that the fashion world is bigoted regarding human beings in general, including people who are overweight. “There are now beauty campaigns supporting full-figure women, but at the end of the day, you are getting me a very pretty woman and asking me to be confident about my look. The fashion world has so many conflicts; they can’t accept different opinions, they can’t accept Arabs. It’s like a mafia,” he claims. Temraza's gowns are donned by celebrities like Teni Panosia, but most of her clients in the Arab world, she says, are veiled.

“Shall one then accept that some women teach others to put on more clothes in order to be modest? Fashion is not guardianship,” adds Hegazy, in response to Berge’s appeal to fashion labels to teach “women to revolt, to take their clothes off.”

Temraz agrees: “This is their culture; we can’t go around criticising other cultures. He is talking about freedom; but it also my freedom to choose what to wear. Real designers are artists, and create art no matter what situation they are put in. And that’s our challenge,” says the designer, who just returned from participating in a leadership programme in The Netherlands, after she was invited by Dutch Ministry of Foreign Affairs.

“We are in an era where people are aware that certain styles should be grasped by clients,” she admits. “But I don’t like saying that what I do is the right thing. Yes, we create trends, but we also need to meet demands of clients. When Chanel came up with her famous feather hat, it was because she had already found people wearing hats, so she introduced it in a new way,” she exemplifies. "My beloved daughter, I give you now to live with him, not for him," reads one of Kojak's captions in his bridal collection Elysium.

This month, Egyptian fashion designer Aya Mahmoud made headlines as she organised the Hijab Beauty Pageant. In an interview with Al-Monitor, the artist said the event highlights the compatibility between being stylish and wearing the veil, while challenging depictions of veiled girls and women as unattractive or lacking fashion sense.

"If you want freedom, let it be freedom for all; being covered doesn’t have to mean ugly,” Kojak says. “You can create clothes to make them comfortable, beautiful, and feel good about themselves.”

An iconic statement of inclusiveness in terms of personal choices, age, and body shape, Kojak frequently includes his own mother – who is veiled – in his fashion shoots. “Because society automatically relates your being open minded or looking fashionable to staying away from women who cover themselves,” he explains.

His latest campaign, a bridal collection called Elysium, told through the words of a mother to her bride, reads: "My beloved daughter, I give you now to live with him, not for him."